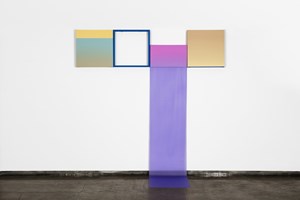 Han contemplates notions of space and time and translates her ideas into perceptually stimulating paintings and installations. Using non-traditional materials and applications, Han will challenge the viewer to leave behind preconceived ideas about space and experience new perceptual possibilities.

For Insights, Han will present a site-specific installation that includes paintings, wallpaper, lighting effects, sculptural forms, and objects to compose a unique viewing environment. The exhibition walls serve as a key component to the installation as it acts as the barrier or skin between the interior/exterior, private/public, and domestic/foreign spaces. The sunlit ocean during the day and the fog illuminated by Hong Kong's city lights at night inspired the vibrant blue tones for SKIN.

Large portions of the walls will be covered with a classic blue tone damask pattern wallpaper and the triangular forms placed against its edges will appear to fold over or extend into other dimensions. Each wall of the exhibition space will contain a painting lit with its own unique light source. Although small in size, each painting will play an active role in realizing the synthesis and layering of spaces within the multidimensional installation.

Bae Yoon Hwan's _Self-Portrai_t consists of overlapping, interconnected drawings that express artistic struggle against the backdrop of the current art market boom. Significantly, instead of merely offering criticism, Bae conscientiously explores both the strife and the necessity of artistic production. He dissects the conflicts that arise in this contemporary situation, showcasing the anxiety of creative anguish, as well as the need for survival.

In the video, the artist presents himself using three avatars: a taxidermist, a client, and a mounted animal. Through a continuous conversation with the client, the taxidermist completes the stuffed animal. Bae highlights the fracturing of the self that occurs when trying to balance demands, both external and internal. The work unfolds through animated drawings that push the boundaries of the medium while emphasizing its continued importance in contemporary art practice.

The video moves between unfinished non-linear narratives with obscure beginnings and endings; a succession of flowing images and languages roams in search of a destination. The film ultimately demonstrates Bae's determination to commit himself to the authentic acts of drawing and painting.

Anna Han received a BFA in Fine Arts at the Pratt Institute, the U.S. and an MFA in Fine Arts at the Cranbrook Academy of Art, U.S. She is also a graduate of the Skowhegan School of Painting and Sculpture in Maine, U.S. Han has held solo exhibitions at Gallery Baton, the Shin Museum of Art and the OCI Museum of Art. She has participated in group shows in Korean institutions such as the Cheongu Museum of Art, the Goyang Aram Nuri Art Museum, the Dongdaemun Design Plaza, and the Busan Biennale Special Exhibition. She has also presented her work in in the Midwest and Northeast of the United States, specifically in New York, Michigan, and Wisconsin, She was selected to attend art residencies in Cheongju, Goyang, New York, and Bad Ems. Her works are included in the collections of the Seoul Museum of Art and several other national leading art establishments.