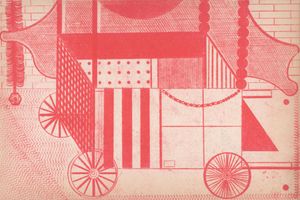 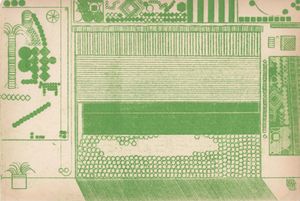 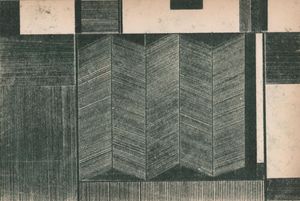 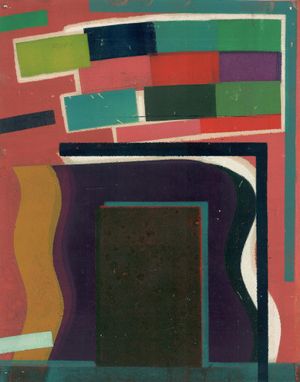 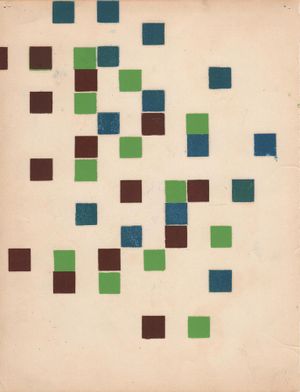 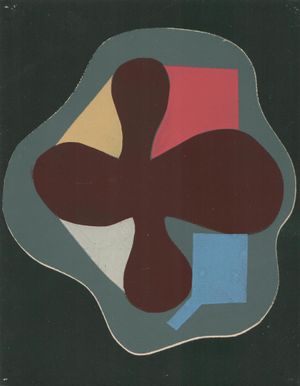 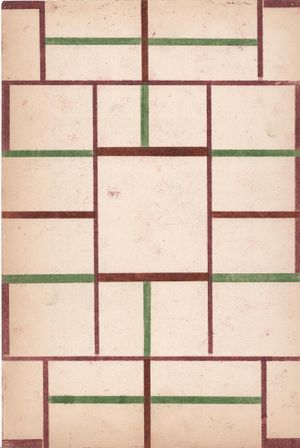 FIFTY ONE TOO is excited to announce its first exhibition of American artist Sean Sullivan (born in 1975 in New York City, lives and works in the Hudson Valley, New York). Situated somewhere between painting, drawing, printmaking and writing, Sullivan's work is difficult to classify and contains a kind of enigmatic mystery that continues to fascinate.

In this first exhibition at the gallery, Sullivan presents the viewer with a diverse selection of works that provide insight into his various subjects and techniques. The majority of the works on view were made using a transfer technique for which Sullivan creates his own kind of carbon paper by applying oil sticks to a sheet of paper by means of a silkscreen squeegee. The resulting homemade oil transfer paper is then placed face down on a sheet of found paper–usually pages torn from old books–after which Sullivan makes a ballpoint drawing on the verso of the found sheet. Through the transfer paper, the drawing is then 'printed' on the recto of the book page.

By means of this 'primitive' transfer process, Sullivan creates among others meticulously elaborated line drawings featuring architectural in- and exteriors (such as facades, canopies, brick structures and other ornamentation). The absence of people in these images is striking, as if we are looking at a weathered architectural design for an extinct society. Both these works, as well as the more abstract geometric design-like patterns on view, are relatively simple in structure and composition and feature recurrent motifs and shapes, such as closely packed parallel lines, rows of circles, dots and cursive curls. Through this modest technical vocabulary, Sullivan is able to obtain both highly stylised compositions, as well as pictorially very dense surfaces in which movement is created through repetition. Nu Mnemonics (2020) or End Paper (2020) are examples of such almost vibrating works. The calligraphic 'scribbles' of the latter may remind the viewer of a chaotic piece of music paper or a written text in a language that has no inherent meaning.

By embossing his drawing on a second support, Sullivan's transfer technique can be compared to printmaking. The affinity with mono prints is even more evident in a second group of works included in the exhibition, consisting of colourful graphic abstractions of organic forms that closely resemble silkscreen prints. Works like Premonition (2020) and Door Dusk (2018) came about using hand-cut stencils, with each colour applied separately by means of a different oil transfer paper. The resulting schematic works–that are reminiscent of the colour field paintings from the 1950s and 1960s–strongly contrast with a third group of works on view, consisting of freehand painted oil paintings on found paper. With loose brush strokes, Sullivan lets go of all control and explores colour, material and emotion in a free and uninhibited manner.

This last group of artworks is an illustration of how Sullivan–despite being limited by a set of self-imposed procedures and parameters– essentially works in a very instinctive way. As precise, analytical and seemingly controlled the majority of his works may appear, much of them came about through improvisation, guided by an interesting combination of mathematics, music, language, sound and emotion. Next to this, Sullivan also allows unknown factors to play a role in the realisation of his works. See for example the uncontrollable way in which the oil paint is transferred from the transfer sheet to its new support, but also that support itself: old book pages, that inevitably add their own patina and history to the end result. Sullivan therefore compares his works with early photography and music recordings that, due to their age, bear the traces of the atmospheric conditions in which they were made and preserved throughout the years. Although these elements lay beyond the initial creator's intent, they nevertheless add a unique tone, beauty and mystery to vintage objects. In a similar way, Sullivan's works can be described as palimpsests, intuitively constructed mark by mark and colour by colour, until both new and old, intentional and unintentional elements come together in an harmonious whole. Quite appropriate, Sullivan himself describes the result as 'recordings of sounds and colours'.

The title of this exhibition, New Mnemonics, satisfies Sullivan's personal penchant for wordplay and the musicality inherent in language. In the words of the artist, 'I've always been intrigued by the "silent" letters, their mysterious and aloof presence. They stand stoic, like witnesses to the word they serve, quietly influencing and in some cases, merely decorating its edges. Sound familiar? Like art, what exactly is their purpose? As an artist, I don't need an answer. The play, the process, the resultant aesthetics is enough.' In the specific case of the word 'Mnemonics', the formal, structural qualities (the silent, capital 'M') and its meaning (a device such as a pattern of letters, ideas, or associations that assists in remembering something) come together to form a perfect and humble mechanism. One that can be jotted on a piece of paper and fit into a pocket. It is as old as language itself and helps us to recall and remember that which is perhaps our most human of qualities; our memory.