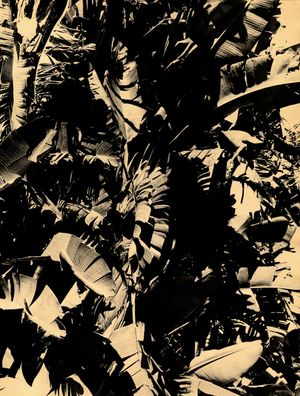 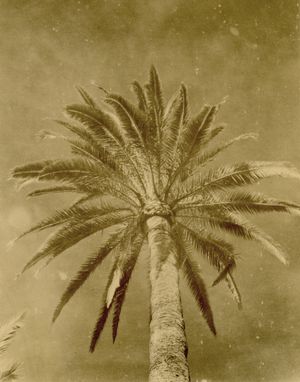 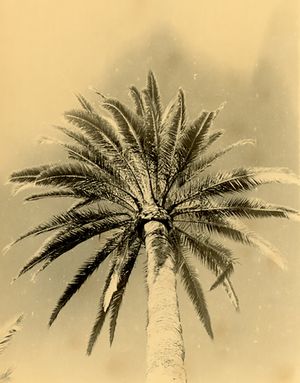 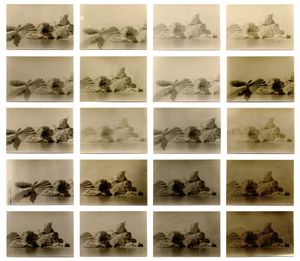 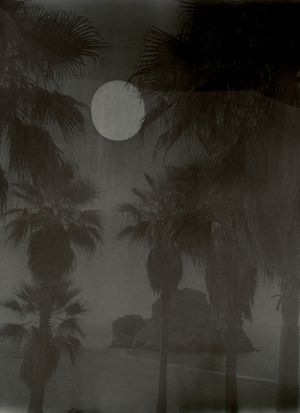 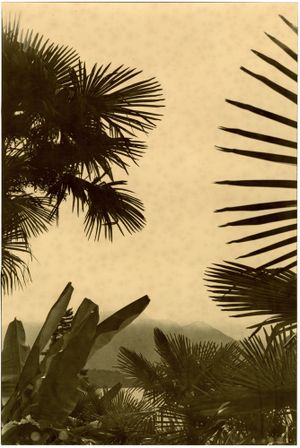 In his fourth solo exhibition at Gallery FIFTY ONE, Bruno V. Roels shows more of the playground he's built for himself. His practice is still grounded in the possibilities of the analogue photographic process. New, however, is the fact that he allows his other interests (language, modern art in general, semiotics...) to pop up.

On view in the gallery this time are not only compositions of gelatin silver photographs, but also posters, postcards, jigsaw puzzles and even a vitreous enamel sign. For Roels, it all points towards a single idea: everything is a text. Language allows us to use a limited set of elements to build ever-changing and endless worlds. But if everything is a text, and if his work can be read, what is Roels trying to tell us? In his words, 'Paradise is just around the corner, but we'll never reach it'. Sure, we busy ourselves looking for paradise, but in the end, it's an unsustainable concept. In the meantime, however, there's nothing stopping us from trying to get as close as we can, Roels will happily be our guide. The process is as important as the result.

Some notes on the show:

1. The title of the show is taken from Paradis À Vendre (Paradise for sale), an edition (a poster) with the same name Roels made during the covid lockdown. It is a play on a Marcel Broodthaers work Musée d'Art Moderne à Vendre - pour cause faillite (1970-1971) in which he attempted to sell off his made-up Museum of Modern Art because of bankruptcy. Roels made a replica of that poster but declared paradise (or the idea of paradise) bankrupt. The poster is an austere affair, a message of defeat in a no-nonsense black font.

2. The pink Looking For Paradise? poster was produced during the covid lockdown. Roels sends these little posters to anyone who asks for it. It's the kind of poster you would find on a student bulletin board. Printed on generic pink paper it asks whether the viewer is looking for paradise and offers a small palm tree in return. The question is casual enough, but it opens up a world of interpretations depending on your definition of 'paradise'.

3. Both 'slogans' appear to be at odds with each other. Paradis À Vendre seems an economic proposal whereas Looking For Paradise? takes a more metaphysical, personal approach. To Roels, however, they are the same.

4. No matter what system you operate in, paradise is elusive, and can only be traded. In an economic system, you can trade it for money (holidays, investments...). In a psychological/religious system, you can reach paradise (heaven) if you follow a set of strict rules. There's no escape; access to paradise demands a form of payment or effort.

5. The 'impossible' jigsaw puzzle, one of Roels' tongue-in-cheek multiples, illustrates this point well. A 1000-piece puzzle that is almost impossible to put together. Only the very dedicated will be able to finish it, and even then, they have very little to show for their efforts.

6. Roels puts the same kind of effort into the printing and arranging of his bigger compositions. Making hundreds of prints of the same negative may be interpreted as a compulsion but for Roels, it's a calming ritual. Here, also, the process is as important as the result.

Belgian artist (°1976, lives and works in Ghent) Bruno V. Roels is known for his exploration of the possibilities of the analogue photographic process. Through darkroom experiments and by playing with the reproducible qualities of the medium, Roels creates unique works that often consist of multiple variations on the same negative. His highly recognizable aesthetic is characterized by the yellowed, coffee-toned colour of his prints, lending his work a vintage look and feel. While creating, Roels allows accidents to happen (e.g. stains and creases occurred during the printing process but left visible) and manually edits most of his prints by drawing on them. Lately, he also experiments with placing texts on his images. This organic process results in a playful oeuvre that transcends the photographic medium in the strict sense of the word.

Iconographically, Roels often remains faithful to the same subject: the palm tree and its history as a visual icon. To a Western audience, the palm tree immediately sparks associations with holiday, adventure and wealth. According to Roels, this connotation is rooted in Western colonialism and imperialism - under which the imagery of the palm tree was widely used to project an exotic aura to the empire. The orientalist way in which our past is presented here as beautiful, mysterious and adventurous stands in stark contrast however with the dark reality behind it. This escapist dream image of the palm tree lives on to this day. Fascinated by this ambiguity, Roels investigates the complex iconographic spectrum of this symbol in his work. Behind the façade of his beautiful palm tree compositions thus hides a commentary on how we look at our (colonial) past, but this, however, always in a playful way.

Sign up to be among the first to know when new exhibitions by Bruno V. Roels or at Gallery Fifty One open.
Sign UpLogin