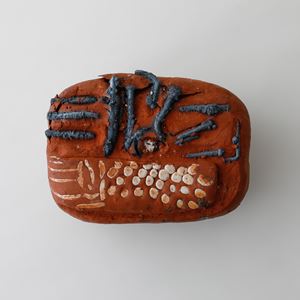 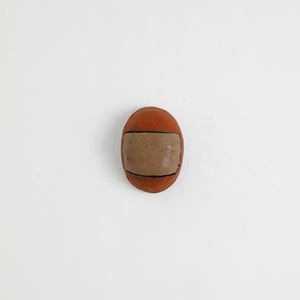 “I feel like it's the beginning, and now I'm making new ground” These words, which represented Mr. Kim Hono's life as an artist, cleared my anxiety. I had been unable to organize an exhibition for a long time, but I feel like I have been waiting for this feeling for a long time.

I received a message saying, "I just finished baking your work, come and see it” I visit his studio in the mountains. There were shapes that Kim had been working on as he had intended - a shape that was honest, warm, and quiet, but with a intensity inside. "I want to create something that can only be made now, something simple, but something that comes from within the earth” He said. He kneads the clay, rolls it up, and gropes to draw out the something contained in it. The process of extract something from the soil, which seemed to be an attempt to explore the primitive act of working with the soil. And then he releases his identity as a human being, as Kimhono.

We layer and trace our feelings and the heat that we ourselves emit there. We grasp the wriggling sensations and overflowing forms with our senses. When we touch it, we feel like the lid of our hearts pop open. When I took the work in trust and finished photographing it, I was even more convinced of this, as it was the beginning of our journey together. Thinking of the photographer, the designer, and the people with whom I'm sure to form a relationship here, I am preparing for my first exhibition at the gallery in a few months with great emotion. The beginning of Kim Hono's mesmerizing earthen time is just around the corner.

Sign up to be among the first to know when new exhibitions by Kim Hono or at Gallery NAO MASAKI open.