Choi's piece present an illogical situation rather than a concrete shape or narrative. She describes today's people who live while hiding their true selves, and their emotional and psychological states that appear in a moment of confusion caused by such hypocrisy. The shape of canvas, looking like kind of theatrical stage, spreads out a subjective image that follows her stream of consciousness that came from her experience and memory. Choi Suin received a Bachelor of fine Arts and a Master of fine Arts from the School of Visual Arts at Korea National University of Arts in Seoul, Korea. Since 2012, she has held six solo shows at museums including Kumho Museum of Art, Gallery Chosun, and has joined four dual-artist exhibitions. She now lives in Seoul, creating her works and steadily presenting them at home and abroad. 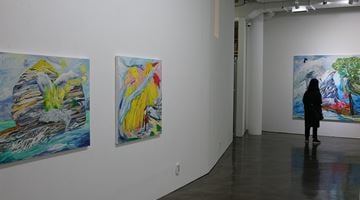