Minnette Vári’s (b.1968 in Pretoria, South Africa) body of work conflates history with the self, examining how identity arises out of a traumatic past. As Kendell Geers observes in a catalogue essay published in 2004 by Kunstmuseum Lucerne, ‘Minnette Vári has in her lifetime witnessed the fall of apartheid and all its structures, followed by the new democracy.’ In response to this history, Vári has written a history of herself in relation to this trajectory, one that attempts to recover what is lost, to give shape and voice to forgotten or erased memories. In her videos and drawings, Vári frequently depicts her own body enduring a disfiguring metamorphosis–she merges with and emerges from nature as well as from the concrete architecture of modern cities. The female ‘protagonist’ of her video works is sometimes archetypal and sometimes spectral, a persona who ingests and is ingested by time.

Vári has exhibited her work since the early nineties, participating in such group exhibitions as the Johannesburg Biennale, Memoris, Intimas, Marcas at MUHKA in Belgium, the Venice Biennale, the Seoul International Media Art Biennale, and the Havana Biennale. Her solo exhibitions include Aurora Australis at the Standard Bank Gallery, Johannesburg, Chimera at Art Unlimited, Basel, Vigil at Serge Ziegler Galerie, New York, and shows in 2008, 2009, 2010 and 2013 at Goodman Gallery, Johannesburg.

In early 2016, The Standard Bank Gallery hosted a major retrospective exhibition on Vári, entitled Of Darkness and of Light. 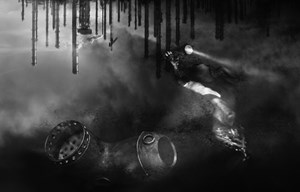