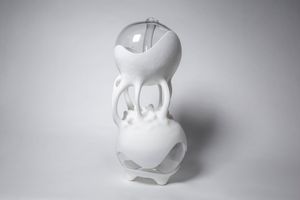 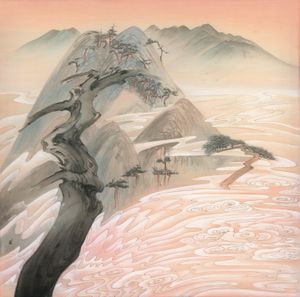 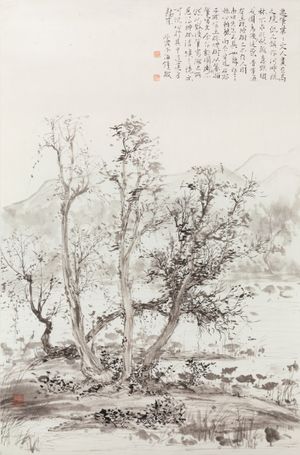 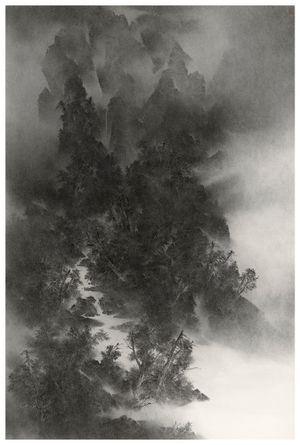 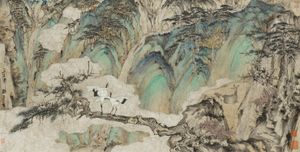 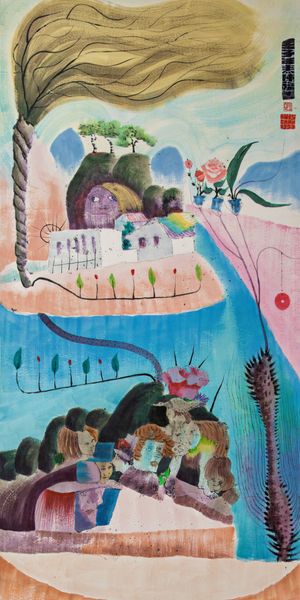 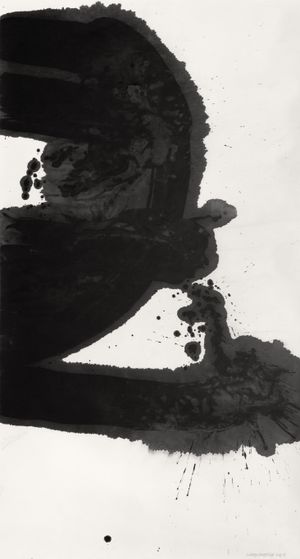 Shanshui ('mountains and water') landscape painting is the art form that best captures the spiritual essence of Chinese culture. The Chinese imagination of "magic mountains" posits a realm for the spirit that is both transcendent and concrete, and over the past millennium shanshui art has come to represent a spiritual site that is simultaneously religious, escapist, romantic and intellectually fulfilling.

This Hanart exhibition brings together contemporary practitioners whose works illuminate important aspects of the subject of shanshui from diverse angles. The selection traces developments in both the modern academy and contemporary art history, and also includes emerging artists of outstanding talent. With the debut of 2 new media artists, Tobias Klein and h0nh1m (Chris Cheung), the show at Art Basel presents a wide range of interpretations and elaborations of shanshui by different generations of artists.

Both Leung Kui Ting (b. 1945) and Cao Xiaoyang (b. 1968) are celebrated for the intricacy and compelling imagery of their paintings.

Leung Kui Ting's ground-breaking works have consistently embraced a new, integrated narrative, where the contemporary became organically infused with the traditional. Leung's distinctive Digital Strokes (broken-ink line) series is no less than a kind of genetic reengineering of the traditional cunfa (texture stroke) method of traditional Chinese landscape art, restructuring shanshui through the lens of a modern visuality.

In Cao Xiaoyang's works, the artist's innovative signature technique of highly intricate "painting"—using charcoal instead of the soft brush— endeavors to transcend the boundaries of traditional ink painting. Cao's atmospheric, contemporary landscapes evoke the magic of ancient masters, and capture the spirit of nature treasured by artists over a millennium of landscape practice.

To seek out the roots and origins of the styles and techniques of brushwork has been the orthodox practice of Chinese painters throughout history, but of course there are different levels of determination. Zheng Li (b. 1964) and Lin Haizhong (b. 1968) represent two extremes of "literati painting".

Zheng Li's works express his responses to and confrontations with the history of Chinese painting. In an astonishing tour de force, Zheng Li has created a completely new version of the handscroll Dwelling in the Fuchun Mountains, a masterpiece by Yuan-dynasty artist Huang Gongwang, by painting the entire composition in reverse.

The landscapes Lin Haizhong creates through his 'Chan inkplay' can be divided into two categories: Daoist or Chan Buddhist figures amidst the landscape, and pure, majestic landscapes that impart a sense of the clarity and coolness of the Chan spirit. Lin spent three years painting a monumental 50-meter-long mural in the Lingyin Temple in Hangzhou, which is one of the oldest and most significant ancient Buddhist temples in China, and his paintings reflect this sense of spiritual commitment.

Both Wang Dongling (b. 1945) and Xu Longsen (b. 1956) are celebrated artists whose work has been shown in museums throughout the world.

Entangled Script and Calligraphic Paintings are calligrapher Wang Dongling's representative creations. Entangled Script is the culmination of Wang Dongling's lifelong pursuit of an art that is both universal and Chinese, forward-looking and firmly grounded in the past. Wang Dongling breaks away completely from the implied grid of traditional calligraphy, interweaving individual characters and entire columns into an amorphous field. The calligraphic lines take flight in their variations in texture and rhythm, and yet remain tenuously tethered to the text as musical performance is to score and meter.

Xu Longsen's key contribution to the evolution of landscape painting is his own concept of 'monumental ink,' which is deeply immersed in China's painting tradition while at the same time infused with a completely contemporary language, representing the Xu's unique methodology of challenging the structural space of the exhibition hall and opening up unprecedented new vistas that break through the traditional boundaries of shanshui landscape art.

To uncover the realm that lies in the deepest regions of the heart, requires meditation and insight, and those unequal to the task will never discover the way there. This realm can only be entered through a gate that opens onto a path between reality and illusion. Both Luis Chan (1905-1995) and Luo Ying (b. 1973) are master "realm makers".

Of all the great Chinese modern masters, Luis Chan is perhaps the only one who fully faced up to contemporary culture and its challenges. By the time Luis arrived at his fantastical landscapes of the 1970s, the strange creatures that inhabited his earlier works were now being placed within the context of an ordered landscape encompassing heaven and earth. This cosmic landscape is, for the most part, positive in nature, rather than nightmarish: Despite the fact that within the mountains and under the sea are concealed ghosts, spirits and entities of every description, the overall effect is of one of luminosity and spiritual clarity.

In Luo Ying's landscapes, we encounter fantastical scenes that, although not fairylands, are yet other-worldly. Luo Ying excels at creating her dreamy landscapes using the traditional gongbi (fine line) method and painting on semi-translucent silk surfaces. Luo Ying opens the gate into a realm where the "dust of the world" is shaken off and its mundane noise is banished. In her delicate worlds, mountains quiver as sparrows flit across the sky; and cranes seek shelter amidst grottoes that shimmer with mysterious auras.

Tobias Klein (b. 1979) and h0nh1m (Chris Cheung, b. 1983) are emerging artists skilled at utilizing technology in their artmaking.

Tobias Klein's Material Voids series combines glass blowing and digital 3D printing to explore the characteristics of materiality, time and space within the forms of both 'digital technology' and 'handmade craft'. At the same time, his interventions in virtual space and the physical dimension shed light on our current living environment.

The artist h0nh1m uses 'thermal ink' to paint on traditional xuan paper, and then uses a process of integrating programming and mechanical components to create his InkFlux series of works. A data map collected from earth and sky intermittently appears on the black painting surface; a fleeting image, now here, now gone, it induces in the viewer a deeper contemplation of existence.

Sign up to be notified when new artworks and exhibitions at Hanart TZ Gallery are added to Ocula.
Sign Up