Elizabeth Cooper's paintings are exploratory and experimental and proof that gestural abstraction can still look fresh more than fifty years after the dawn of Abstract Expressionism. Her paintings all begin the same way–a flat, monochromatic application of paint over the entire canvas, a la Ellsworth Kelly's Specturm V at the Metropolitan Museum. Cooper then pours, splashes, and splatters paint onto the surface of the canvas, creating abstractions that sometimes stray into the realm of representation. This perhaps can be attributed to Cooper's choice of palette–hothouse colours, which once poured can take on a life of their own, like a Rorschach test coming alive on a candied enamel ground.

Cooper's adoption of gestural abstraction both draws from and questions her stylistic predecessors, for though she coops the formal vocabulary of high modernism, her bright colours and organic compositions banish any mysticism or reverence inherent in Abstract Expressionism. Her drips and pours often seem to grow from the borders of the canvas, recalling exotic blooms as much as formal and gestural experiments. There is a sense of velocity in these brilliant skeins of paint, as they shoot across the monochrome ground, intersecting and building upon the accumulated colour. At the same time, Cooper's compositions also communicate a delicate ethereality, as if the viewer has caught out a rare and transient visual experience.

Elizabeth Cooper has been exhibiting consistently in New York and abroad since the mid-1990s. Educated at Cooper Union and Columbia University, she has won numerous grants and awards, including prizes from the Lerman Trust, MoMA P.S.1, and Skowhegan School of Painting and Sculpture. Cooper lives and works in New York City. 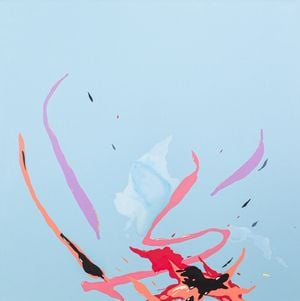 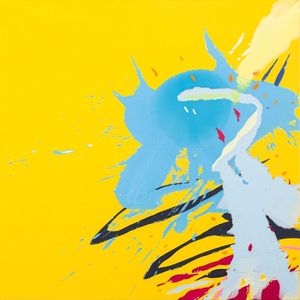