Born in 1908 at Corrine West, she spent most of her formative years in Ohio, first in Columbus and later in Cincinnati. There she attended the Cincinnati Conservatory of Music before enrolling the Cincinnati Art Academy in 1925, after opting for a career in the fine arts. Allured by the promise of the big city, West relocates to New York in 1932, continuing her art education the following year at the Art Students League. A member of Hans Hofmann's first class at the League, West credits her instructor as a lasting influence on her art. Hofmann's emphasis on the "inner eye," the ability to apprehend the essence of things, guided the artist in her spiritual approach to abstraction, long after she had sought out other teachers and mentors.

Another prominent figure in her life, and one with whom she would develop an intimate, romantic relationship, was the artist Arshile Gorky, whom she met through a class monitor at the League, Lorenzo Santillo. West and Gorky spent countless hours visiting local museums, in particular the Metropolitan, and discussing art. Gorky introduced the younger artist to important sources for West's work, such as European Surrealism. West avidly read the work of Surrealist writers such as André Breton and Isidore Ducasse, and drew on their celebration of the operations of the unconscious mind in her art.

In the mid-1930s, West, like her contemporaries Lee Krasner and George (Grace) Hartigan, adopted a masculine nom de brosse. Perhaps encouraged by Arshile Gorky's name change, she initially chose the Russian-sounding, Mikael, but later anglicized the spelling. Fiercely independent and driven, West sought respect based on the merit of her work, free from the bias of gender.

Gorky's emphasis on drawing remained an important model for West's work. His study of the Old Masters encouraged West's appreciation of the linear approach to painting (the disegno model of the Raphael tradition), and their visits to museums only furthered the development of West's own art. A series of works she produced in the late 1940s revealed how she wielded the paint brush to translate the process of drawing to painting.

Following the dissolution of her marriage to her first husband Randolph Nelson, in 1935 West moved to Rochester, New York, where she participated in the Rochester Arts Club. Her Portrait of Manuella garnered critical praise when she exhibited it at the Rochester Memorial Art Gallery that same year. In the late 1930s and early 1940s, West exhibited repeatedly in solo and group exhibitions in Rochester; several of her works draw the favor of the press, among them a series of drawings on view at the Rochester Fingerlakes Exhibition in 1943.

In 1946 West moved back to Manhattan, and became active in the thriving postwar artistic culture of New York City. She married, in 1948, the avant-garde filmmaker and photographer Francis Lee, giving birth to her only child, Lionel Sardofontana Lee, the following year. As frequent host to a number of Surrealist exiles in New York, Lee forged connections to artists such as Joan Miró and Robert Motherwell, as well as to influential critics like Harold Rosenberg. Possibility as a result of such soirees, West made the acquaintance of fellow artists Jackson Pollock and Richard Poussette-Dart, with whom she shared an emphasis on the painterly process as well as the affirmation of a spiritual essence within the universal language of abstraction. Like Poussette-Dart, eight years her junior, West sought to convey "'the Door to a Spiritual World' through the 'Creative fire' of art." (1) Her works from this period reveal pictographic grids and loosely abstracted forms with vague references to the outside world; often working directly from the tube, these paintings exhibit exquisitely wrought surfaces, built up with thick impasto and worked with a palette knife to create what Possette-Dart referred to as "a material awareness of spirit." (2)

Inspired by the philosopher Henri Bergson's belief in the interconnected nature of all living things, West developed an aesthetic philosophy she termed "new mysticism in painting." In a 1946 essay, she described her negotiation of the surface world of appearances and the immutable core essences of being: "The outer world changes as our thoughts change although our thought is usually ahead or in advance of the world viewed materially. To disintegrate visual unity...to break up and change outer appearance is necessary if the individual can penetrate the nature of our mystic universe." (3)

West's move to New York also brought the artist increased opportunities for exhibiting her work. She showed at the Rose Fried Gallery in 1948 and three years later at the Stable Gallery. In the late 1950s, West received a solo exhibition at the Uptown Gallery, New York, and also at the Domino Gallery in Washington, D.C. Her one-person show at the Uptown Gallery received praise for its energy and vitality, drawing comparisons to Pollock's work.

In 1976 West suffered a stroke, although this did not prevent her from continuing painting; instead, she seemed to appreciate the release from the pressures of exhibiting it afforded her. In 1981, she expressed her commitment to her art: "No more shows—I just want to paint in peace—As this drive to paint forces me on." (4) Five years after her death in 1991, the Pollock-Krasner House Foundation mounted an acclaimed retrospective of the artist's work, entitled "Michael West: Painter-Poet." 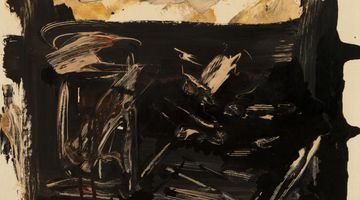 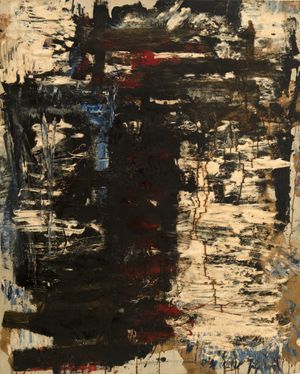 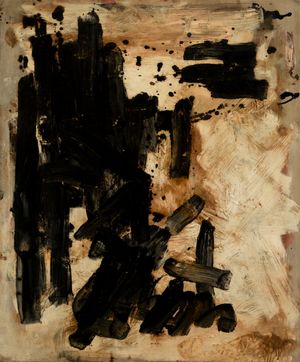 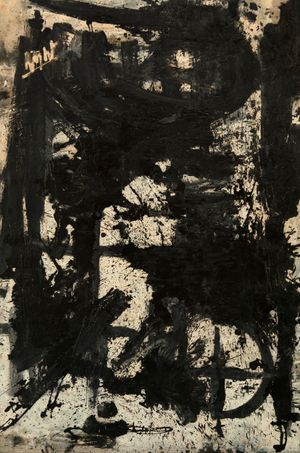 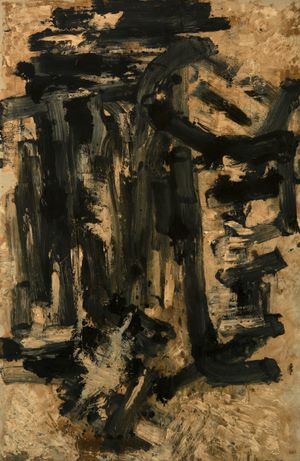 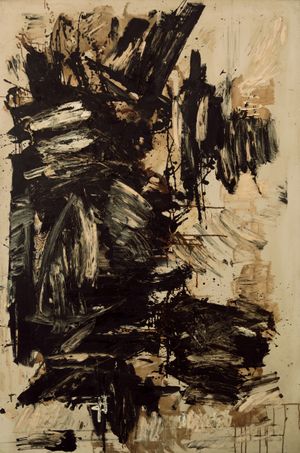 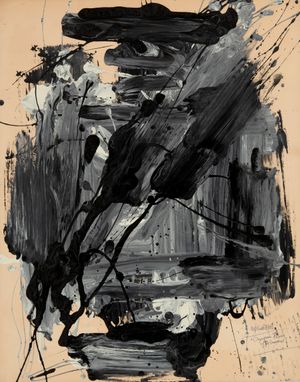