Born December 24, 1924, in New York City, Michael Goldberg continued to live and work in Manhattan. He began his artistic training at the Art Students League in New York (1938) and attended Hans Hofmann's School of Fine Art (1941–1942) before interrupting his studies to serve as a paratrooper in the United States Army in North Africa, China, Burma, and India. After World War II, he resumed his classes with Hofmann. He became involved in the avant-garde New York art scene, meeting Franz Kline, Willem de Kooning, Jackson Pollock, and Milton Resnick among others. In 1951, Goldberg, under the name Michael Stuart, showed his paintings in the Ninth Street Show, arguably the first comprehensive display of Abstract Expressionist work. The following year he moved to 28 East 2nd Street and joined the artists' 'Club' on Eighth Street, gathering with other Abstract Expressionist painters to exchange artistic ideas.

Around this time, he met the poet Frank O'Hara, who became a life-long friend and dedicated many poems to Goldberg. In addition, they collaborated on a project titled Odes in 1960. Goldberg maintained his connection with the Abstract Expressionist painters throughout the fifties and into the sixties. By 1953, he was a regular at Cedar Bar, known as a meeting place for avant-garde artists. Two years later, he moved into a studio next to that of De Kooning and Resnick. In 1962, he acquired Mark Rothko's studio at 222 Bowery where he worked until his death.

Teaching has played a central role in Goldberg's career. He has held visiting artist positions at the University of California, Berkeley (1961) and the University of Minnesota (1967) and has taught at the School of Visual Arts in New York City since 1979. Beginning in 1980, accompanied by his wife, the artist Lynn Umlauf, he has spent long summers in Italy. Many of his later pictures are inspired by Italy's celebrated artistic heritage.

Goldberg's work defies classification, having undergone numerous changes throughout his long and prolific career. He has painted dynamic, gestural canvases; monochromatic, minimalist works; grids; calligraphic images; patterned or striped paintings, and he has experimented with collage. By 2003, he had had 99 solo exhibitions since his first show at Tibor de Nagy in New York in 1953. His pictures are in numerous public collections in the United States, including the Albright-Knox Art Gallery, Buffalo, New York; the Art Institute of Chicago; the Hirshorn Museum and Sculpture Garden, Smithsonian Institution, Washington, D.C.; The Museum of Modern Art, New York; the Philadelphia Museum of Art; the Solomon R. Guggenheim Museum, New York; and the Whitney Museum of American Art, New York. 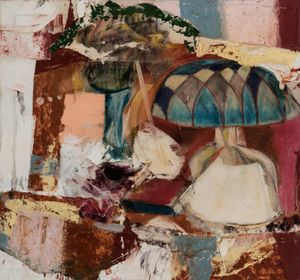