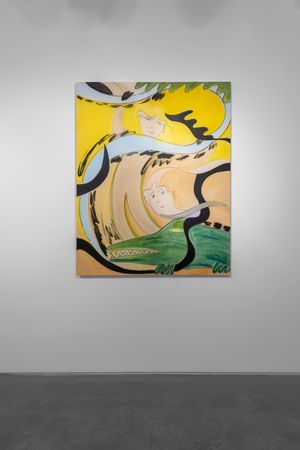 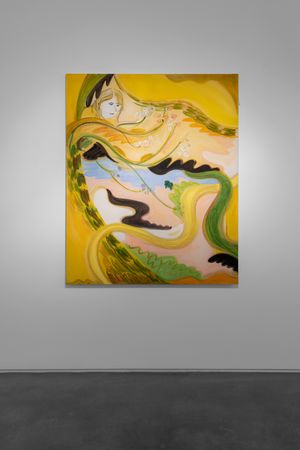 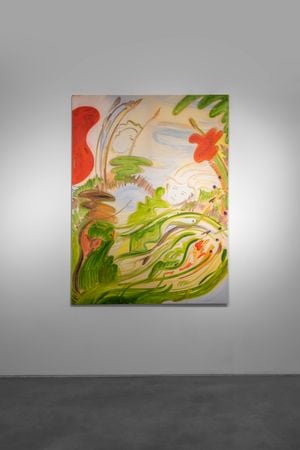 Huxley-Parlour are pleased to announce a solo presentation of new works by London-based artist Yulia Iosilzon. The new body of work, produced in 2020, explores notions of hedonism, escapism and fantasy through the artist's signature vivid colour palette, laced with layers of symbolism and repeated motifs.

Stating that she mixes references 'like a salad', Iosilzon is interested in repetition and duality of meaning. In developing a symbolic language–partly self-invented, partly plucked, magpie-like, from popular culture, folklore and religion–Iosilzon allows for multiple levels of meaning to emerge in her practice. Subverting binaries, her compositions are simultaneously direct and complex, otherworldly and familiar.

A reaction to the isolation of existence in 2020, Iosilzon's new works are joyous in their escapism. Her dense compositions see grinning faces stacked on top of each other, as characters emerge from the paint to share furtive looks. Water is a thread that ties a number of the paintings in the series together, as her figures at once become nymphs, mermaids, and sea monsters. The soft shapes of foliage thread throughout the compositions, rendered in the vivid 'kindergarten colours' of the oranges, yellows, and greens of the artist's imaginary world.

Iosilzon works directly with a mix of oil and silicone on stretched translucent silk. Building up layers of paint, and of meaning, the artist links her choice of medium to a 'mosquito net', offering transparency but also impenetrability. Iosilzon's fractured compositions and disrupted narratives explore ideas of allusion, ephemerality and the consumption of images.

Yulia Iosilzon (b. Moscow, 1992) studied at the Slade School of Fine Art and the Royal College of Art, London. She was awarded the Audrey Wykeham Prize in 2017 and Bloomberg New Contemporaries prize in 2019.

Sign up to be among the first to know when new exhibitions by Yulia Iosilzon or at Huxley-Parlour open.
Sign Up
}