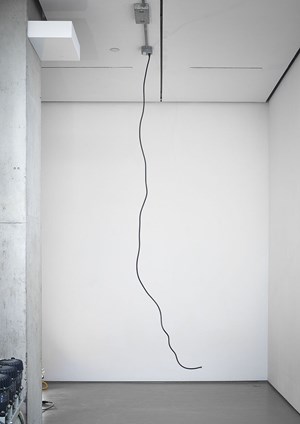 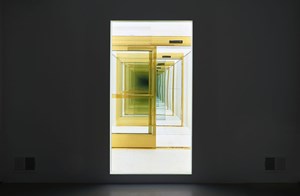 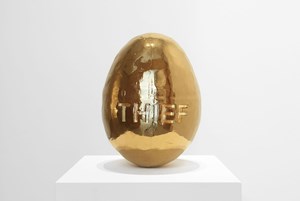 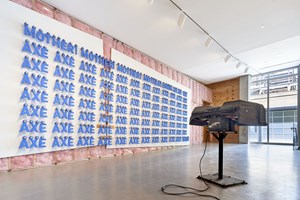 Jane Lombard Gallery is thrilled to present Jack, Sean Shim-Boyle's first exhibition with the gallery. The exhibition debuts his latest work including two ambitious installations that intensify the artist's use of peculiar architectural interventions. The sculptures draw on mythology and fables to develop parallels between the fictional conditions considered in those stories and their pervasion into our self-identity and consciousness.

In Jack, Shim-Boyle maneuvers, warps and internalizes the distinguished iconography of "Jack and the Beanstalk" culminating in elaborate constructions that solicit an amalgamation of the principles put forth in the known tale with one's own familiarities and efficacy. Shim-Boyle weaves the visual narrative with his personal state of being as a bi-racial Korean-Canadian. Jack becomes a vehicle through which the artist explores his biography; Jack who perilously thieves his new way of living and Shim-Boyle, like many 1.5 and second-generation individuals, who must precariously grab on and assimilate to multiple identity systems.

The installations engage elusive anxieties of belonging - states of non-conformity in cultural, political, and physical limbos - through the various movements and sounds encountered. The Beanstalk wire is erratic and assertive, dangerous and alluring. Mother! Mother! is a slice of a simultaneously collapsing and newly built domestic setting, bringing together the nurturing quality of wood block toys and bright colors with the frantic language and unexpected trembling from the industrial paint mixer beside it. Fee Fi Fo Fum uses a motion activated sliding door and mirror mechanism resulting in an echo-chamber of lustrous vanity, endless movement and futile self-awareness.

In amplifying the fear and comfort of unsettled objects, spaces and bodies, Shim-Boyle addresses the fatigue of self-actualization during political uncertainty while asserting the useful mutability and reinvention available in unresolved circumstances.

Sean Shim-Boyle (b.1986 Vancouver, Canada) lives and works in Los Angeles, CA. Shim-Boyle earned a BFA in graphic design from the California Institute of the Arts, Valencia, CA, 2008, and an MFA in sculpture from the University of California, Los Angeles, CA, 2012. Exhibitions include Baltimore Museum of Art (upcoming), Baltimore, MD; THIEF, Various Small Fires, Los Angeles, CA; Sisyphus, SIGNAL, Brooklyn, NY; A Rising Tide Lifts All Boats, LA><ART, Los Angeles, CA and Salt House, Project Row Houses, Houston, TX. He is a recipient of the Joan Mitchell Foundation Painters and Sculptors Grant and is in the collection of the Los Angeles County Museum of Art. 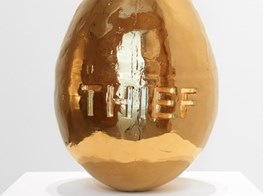 To walk into Jack, Sean Shim-Boyle's first exhibition at Jane Lombard Gallery, is to walk into a space where things are off-kilter, amiss, just slightly wrong. The gallery's main space is taken up by Mother! Mother! (2018), a large textual display made out of blue wooden letters that covers one whole wall. Further down the gallery, a mechanized...

Sign up to be among the first to know when new exhibitions by Sean Shim-Boyle or at Jane Lombard Gallery open.