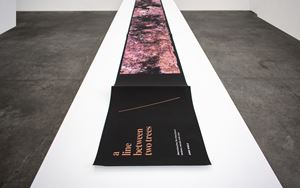 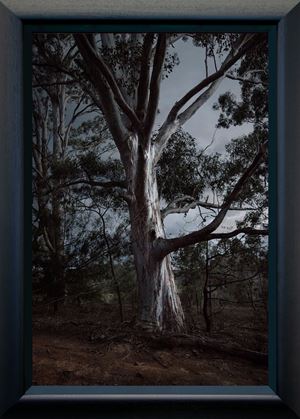 Anne Noble's new exhibition, a line between two trees is a beautiful and considered installation. Noble would have us see in the dark, or into realms beyond the visible, and this is a breath-taking thing. Whether it be day's last light on a eucalypt, scanning film buried in earth to capture conversation between trees, or just having fun with "shooters" in kauri forest after dark, Noble playfully explores photography's ability to make visible both time, and that which lies hidden or within. And she does this via photographic language that is seriously poetic, evocative and often abstract.

The artist's book a line between two trees, Observations from the Critical Zone II with pages laid out open is more than seven metres long. Yet its suggestions are intimate, like an interrogation of pink moss and lichen with black holes of non-communication. In fact, the black registers film emulsion that has been eaten away by the soil's chemical environment. (Noble having buried the film for 2488 hours.) And the pink is Noble's scanner balanced for human skin tone in daylight - utterly consistent with Kodak film setting.

Still, this is the context of the visual and the metaphorical. Tree is an archetypical tree photograph, in which Noble is whittling away at George Chance's famous pictorialism with almost wiccean intent. And in Nocturnal Assembly III, Trounson Kauri Forest, Northland, Noble really is dancing in the dark. All eighteen pigment prints pulsate with life as skeins and ribbons of light swell and unfurl through the blackness. Impressions vary - things are blurred and spectral. Foliage and branches are present. Pests might also be present. And within this marvellous vitality of form, there is more than just the suggestion of a witch's broomstick!

a line between two trees

Sign up to be among the first to know when new exhibitions by Anne Noble or at Jonathan Smart Gallery open.