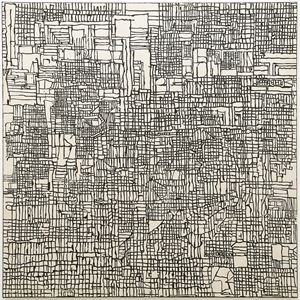 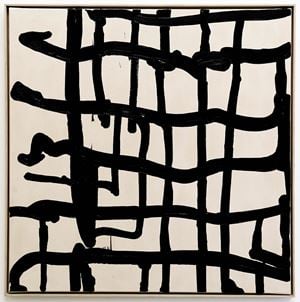 Martin Poppelwell has presented just two grid paintings in the back gallery: the 2000mm square study for an ancient artifact, and opposite, the smaller 1200mm square study for dapple. They have a softness about their palette - matt black against the sized ochre canvas - but there is drama in their contrasting scale. The big painting offers the grid as a restless myriad of comparatively fine lines. They stop and they start. They sometimes fold back on themselves and don't even meet, which is unruly to say the least. This is the grid as maverick - wilful, playful and deliberately quixotic - all held together dutifully by a line around the painting's outside edge.

Martin's exhibition is called the edge of the alphabet, after an early Janet Frame novel. There are two very short passages from the novel, from pp22 and 224, nailed up within the show. One references "the edge of the alphabet where words crumble...", where communication falters, but where others (or other modes including the visual perhaps?) may find speech. Poppelwell's interest is in the diagrammatic, in language, in form that may lack legibility to some, but for others is robust enough a scaffold for all sorts of ideas.

Herein lies the richness of Poppelwell's grids. Porous and decrepit even, they still bristle with pattern and life. Study for dapple surges and swells - its dark, viscous oil paint confidently untethered in parts, yet utterly, utterly right. In fiction, Dapple was a pesky quadruped. In painting this is an experience deeply satisfying.

the edge of the alphabet

Sign up to be among the first to know when new exhibitions by Martin Poppelwell or at Jonathan Smart Gallery open.