Karin Weber Gallery artist Alberto Reguera is an abstract artist who works in painting, sculpture and installation. The artist is well-known for his multi-layered, tactile works in rich tone and texture.

Alberto Reguera's work across multiple media reveals a similar visual structure formed through the use of intense colour and layering. The artist traces his influences to French lyrical abstract artists and to the romantic landscapes of his native Castile. Considered abstract landscapes, the artist's works bring together fragments inspired by nature in the form of shapes and colours.

The artist refers to his works as 'poetry,' and he celebrates the physical act of painting, which is revealed in his layering technique. The works are elevated beyond the two-dimensional as the works' multiple layers suggest no only depth but complexity. His works are both hung on the wall and can rest as objects on the floor.

In 1984 he participated in a contemporary art seminar at the Louvre Art School entitled L'art du XXéme siécle and in 1985 he graduated from the University of Valladolid with a degree in Modern History. The artist was then selected on several occasions to participate in various contemporary art workshops at the 'Círculo de Bellas Artes' (Fine Arts Society) in Madrid, where he received invaluable help from some of the masters of contemporary Spanish painting such as Lucio Muñoz amongst others. In 1994 and 2001 his works were exhibited at Stedelijk Museum, Amsterdam, where famous Dutch musician Bart Spaan, performed some of his contemporary pieces inspired by the artist's paintings.

In 1995 Alberto Reguera received the Paris Fine Arts Academy Award for painting and in 1999 he designed a poster for the Paris Theatre Festival. In 2001 he won the 'Ojo Crítico' Spanish Award in Madrid and in the same year, he participated in the 'Relevos' project with Rafael Canogar, for the 'Museo de Bellas Artes' (Fine Arts Museum) in Seville. In 2003, he was chosen by a jury as the only Spanish artist invited to join the 'Exhibit E' which took place in Washington D.C. He has collaborated in painting and poetry projects with Francisco Pino and Andrée Chedid. In 2007 he showed his works in Asia for the first time in an exhibition in Singapore (Beyond Form) in Sculpture Square.

In 2010 he showed his project Beyond Form II in City Hall, Hong Kong sponsored by Consulate of Spain. In 2012 he staged under the auspices of Unesco, the 'installation painting' at Place du Louvre in Paris. That same year he was artist in residence in Shanghai, where he produced two large expanded paintings for the China Europe International Business School (CEIBS) collection.

Lives and works in Paris and Madrid. 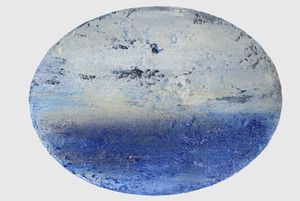 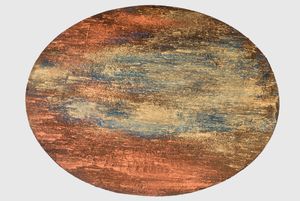