José Lerma (b. 1971, Spain) works with money. Not just the creation of it—painting's alchemical value production—but cash actually floods his content. From paintings and reliefs of huge coins—often featuring royal profiles, hence the Spanish unit of currency 'real' is derived from 'royal'—to portraits of financiers from the past 400 years, the men who make and manipulate money are often at the fore. That Lerma's recent works are constructed with thick cut-outs collaged onto canvas surfaces pushes their subjects even closer. They say 'the nose knows'.

Lerma's nasal Marxists and Chicago boys dredge up more 1970s references than patterned accoutrements; the cooked-up ramifications of neoliberalism and chic revolution impute obscenity to their idols. Narrowing down distinctive features to the barest minimum's a great way to make a mark. When we think of the 1970s it's all disco suits and shaggy hair framing powdered schnozes; sunglasses big as ostentatious lips; clashed patterns that conceal the body's true axis of movement. The sexy, cut economists find a mirror in thick, tangible paintings on the other side of Lerma's recent oeuvre.

Though two styles could be loosely delineated—20^th ^century polemicists painted in equivalent groups thick with pattern and reliant on line, versus the thicker, playful portraits Carlos IV De Borbón and El Pingón—division can't hide their reliance on equally abstract money. Even while Lerma's black roses—thick, crested—evoke the mortality looming behind the still life tradition sharpening its knives in seventeenth century vanita's painting, value bleeds through. The black rose not only fillips the feted symbol, but recalls centuries of horticultural frustration to breed blue or black roses—the royal flower—against its nature. Black roses, then, aren't an aberration: they rescind all claims to mimesis. Inverting the vanita's paradigm, Lerma's roses make reference to uprooted floral tendencies. That Lerma often takes kings, bankers, and financial engineers as subjects shouldn't be seen as painting cross class; bankers played no small role in the wane of noble rule and the ascent of modern capitalism.

Lerma's relentless pop-ness is a function not of the pop genre, but the first reaction to radical approachability. Historical icons melt and seep behind the rubbery, swirling paint. 'It's a big toy with a shady history', says Lerma—a phrase suited to painting itself as much as its subjects. The bright pink and blue kingmakers might shed a little light. 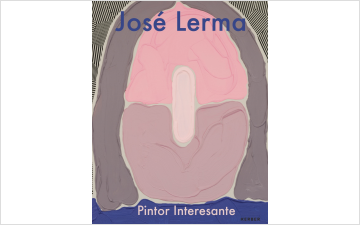