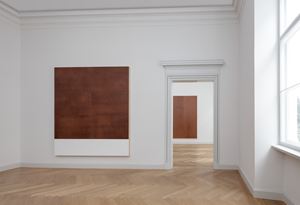 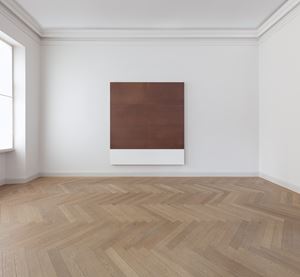 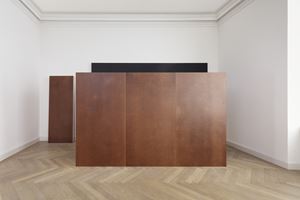 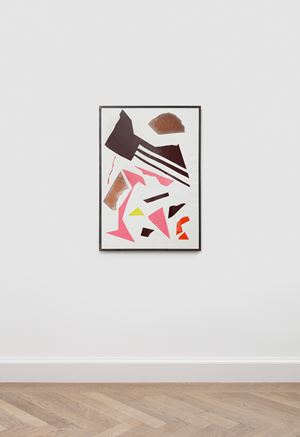 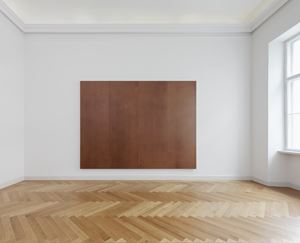 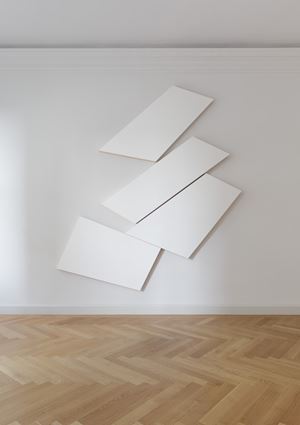 For the Berlin Art Week, KEWENIG is opening Imi Knoebel’s historic exhibition dass die Geschichte zusammenbleibt (So That History Remains Together), which was first shown in 1989 in New York. Standing at the core of the presentation is the installation dass die Geschichte zusammenbleibt – Schattenraum 6 + 3 Bilder (So That History Remains Together—Shadow Space 6 + 3 Pictures, 1989). It belongs to a group of works consisting of a total of seven Schattenräume (Shadow Spaces) which were created in the years 1988 to 1989 and are today represented at such renowned institutional collections as the Centre Pompidou, Paris; the MUDAM, Luxembourg; or the Pinakothek der Moderne, Munich. Thirty years after the fall of the Berlin Wall, the gallery is devoting itself to this fundamental work of Knoebel’s, whose title in a year of political upheavals sounded like an urgent summons with political impetus; it is on display along with other important works by the artist.

Fascinated by Kasimir Malevich’s Suprematist manifestos ever since his early years of study, Knoebel had pursued the Russian artist’s investigation of figure and ground and transferred this principle of painting into a spatial context. At the beginning of his own artistic production, the programmatic sobriety in the oeuvre of the Beuys pupil became particularly clear in the radical minimisation of his painterly means and in the utilisation of industrially manufactured fibreboard panels. In Knoebel’s fibreboard pictures, which often consist of several combined panels, the intrinsic grain patterning of fibreboard is elevated to the status of painting. For a long time, its warm brown tone was, in addition to black and white, the only colour which Knoebel allowed to appear in his works.

Each of Knoebel’s Schattenräume consists of a large-format, closed cube made of fibreboard and positioned directly in front of a similarly-proportioned black picture. The ensemble becomes a three- dimensional picture, carpentered out of wood and fibreboard, in which surface and space enter into dialogue with each other. Schattenraum 6 is distinguished from its predecessors not only by its additional, exhortatory title; it is also accompanied by three large pictures done in fibreboard and acrylic (1989), which lead in the exhibition to other Hartfaserbilder (Fiberboard Pictures) such as Hartfaserquadrat (Ehre an Kasimir Severinowitsch Malewitsch) (Fiberboard Square (Salute to Kasimir Severinovich Malewich), 1991). But above all through the addition of two fibreboard panels stacked and leaning against the wall, Schattenraum 6 is reminiscent of Knoebel’s variably conceived spatial picture Raum 19 (Room 19, 1968) in which, already during his time at the Art Academy in Düsseldorf, he laid the foundation for extensive aspects of his later creative output. And the Keilrahmen (Stretcher Frame, 1968/1989), of iconic significance for Knoebel’s stringent search for the abstract picture, arises from the formal vocabulary of his famous key work in fibreboard.

Further works from the years 1968 to 2004 are featured in the exhibition and illustrate the genesis of Knoebel’s idea of the picture. Of fundamental importance for this concept are light-based works such as Projektion (Projection, 1968). Introducing the exhibition, this work stands emblematically for the phase at the beginning of Knoebel’s artistic production when, in accordance with Malevich, he sought the greatest possible reduction of his artistic means and the immateriality of the work of art. Here with the light of a slide projector, nothing more or less than a rectangular surface is projected. Weiße Konstellation (White Constellation, 1975/1987) likewise stands in relation to Knoebel’s work with light. Four trapezoidal, white-painted wooden panels in an upwardly striving arrangement are reminiscent of forms of light shining through lattice windows onto a wall. White pictures such as this one have their source in Knoebel’s Inenprojektionen (Interior Projections), in which light from a slide projector is shined onto objects in the surrounding space, giving rise to distorted surfaces which the artist then photographed. For the forty-minute video work Projektion X (Projection X), produced in 1972 for Gerry Shum’s Television Gallery, Knoebel drove through Darmstadt by night with a light projector. The walls of buildings throughout the city became the pictorial ground for a gigantic, projected 'X' which constantly alters and distorts its shape as the automobile passes by.

Figur 17 (Figure 17, 1985) is part of a series in which Knoebel applies variously-coloured rectangles in acrylic onto a white ground upon wood in a further point of connection to Kasimir Malevich’s investigation of figure and ground. After a pursuit of his strictly purist line lasting many years, a collage from the context of the Messerschnitte (Knife Incisions, 1977), in which Knoebel combines colour and free forms for the first time, constitutes a veritable upheaval in Knoebel’s oeuvre. In Sandwich 2004–10 (2004), Knoebel returns to the principle of stacking which he had already developed in Raum 19. The picture consists of several fibreboards between which the applied layers of paint remain hidden to the viewer and appear only at the edges. All that can be seen on the surface is the grain pattern of the wood.

Up to now, Knoebel’s Schattenräume received scarcely any mention in art-historical literature. KEWENIG is accordingly honouring this important group of works with a catalogue which will be appearing on the occasion of the exhibition.

Imi Knoebel was born in 1940 in Dessau and moved with his family to Mainz in 1950. Today he lives and works in Düsseldorf. Knoebel has participated repeatedly in the documenta over the more than fifty years of his artistic career. Tribute to his oeuvre has been paid in several comprehensive retrospectives, including a 1996–1997 exhibition at the Haus der Kunst, Munich; Stedelijk Museum, Amsterdam; IVAM Centre del Carme, Valencia; Kunsthalle Düsseldorf; Musée de Grenoble. Further retrospectives came in 2002 at the Kestner Gesellschaft, Hannover; 2006 at the Wilhelm-Hack-Museum in Ludwigshafen, and in 2014 at the Kunstmuseum Wolfsburg. Ever since 2008, the work 24 Colors—for Blinky has been installed at the Dia Art Foundation (Dia:Beacon) in New York. In 2009, the Neue Nationalgalerie in Berlin presented emblematic installations of the artist. As a sign of German-French reconciliation, Knoebel designed various coloured-glass windows for the Cathedral in Reims in 2011 and 2015. Further important solo exhibitions dedicated to Knoebel took place in 2015 at the Kunstsammlung Nordrhein- Westfalen, Düsseldorf; Museum der Bildenden Künste, Leipzig in 2016; Skulpturenpark Waldfrieden, Wuppertal in 2017; and Museum Haus Konstruktiv, Zurich in 2018.

Likewise on display in the exhibition is Imi Knoebel’s Kinderstern (Children’s Star, 1989/2011) in acrylic on wood, with which he issues an appeal to protect children in need. Through the sale of the edition created in 1989, selected projects for helping children were supported by the charity Kinderstern e.V. established by the artist. Kinderstern is also available as a gravure printing, pin and brooch: www.kinderstern.com.

Sign up to be among the first to know when new exhibitions by Imi Knoebel or at KEWENIG open.