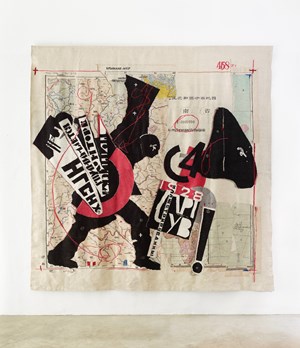 In collaboration with the Marguerite Stephens Tapestry Studio, William Kentridge has been creating large-scale tapestries since 2001. Collages made of torn paper on maps and book pages, which Kentridge takes primarily from antique atlases, serve as a weaving pattern. The resulting silhouetted figures resemble nomads, fugitives, or adventurers, strung together as a long chain, as in many of Kentridge's other works.

The procession is a recurring motif Kentridge uses in various media. It becomes a symbol for one of the artist's most essential themes: migration and displacement, both during apartheid in South Africa and in an increasingly globalised world.

The motif of the nose, which is the protagonist in 'Procession Nose', comes from Kentridge's preoccupation with the staging of Dimitri Shostakovich's opera based on Nikolai Gogol's story The Nose (1836). The nose, which in Gogol's absurdist theatre detaches itself from the face of assessor Kovalov one night to take on a life of its own as a councillor of state, can be seen in a series of adventures in numerous of Kentridge's works.

The Marguerite Stephens Tapestry Studio painstakingly hand-transforms Kentridge's multi-layered works on paper into large-scale tapestries. In Diepsloot, a suburb of Johannesburg, Stephens employs a team of local weavers, cotton spinners and dyers who work on vertical weight looms, processing mohair wool from Swaziland, silk, and acrylic and polyester fibres. Kentridge's works on paper, which always leave room for chance and the special properties of the material, thus find their refinement in the artisanal perfection of the weaving process, which dates back to a 17th-century French weaving method.

Sign up to be among the first to know when new exhibitions by William Kentridge or at KEWENIG open.