Using a loose but virtuoso drawing style, he tells the second part of the story of Isaac Weiss (the first part was shown earlier this year at the Gemeentemuseum in The Hague), a fictive alter ego who runs an artists' colony. The members of the colony are big-name artists of the twentieth century including Cy Twombly, Joan Mitchell, and Pablo Picasso. In this series, we watch as the formerly utopian project of the colony turns into a full-fledged dictatorship and gradually falls apart. 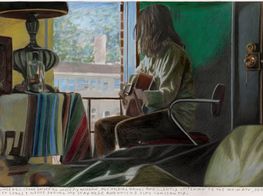 Rinus Van de Velde is best known for his large-scale, fictional self-portraits and life-size decors that serve as the background for his drawings, paintings, and videos that explore the relationship between reality and fiction. The source

Read More
Ocula News The Metaverse Is Already Here. How Will the Art World Inhabit It? Paris, 26 November 2021

The forward-thinking dslcollection is experimenting not just with NFTs but also VR worlds and art-centred video games.

UCCA Edge's exhibition of Andy Warhol in Shanghai provides an intimate view of the artist's trajectory.

Named after filmmaker Derek Jarman, the £10,000 prize goes to a UK-based artist working with moving images.