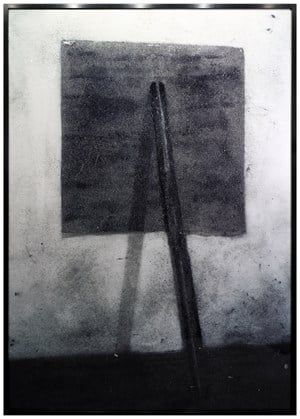 Journeys, featuring the works of three artists, Richard Artschwager, Hamish Fulton and Vik Muniz, creates a space where exploration through time, space and imagination are all on equal footing. Richard

Artschwager's 1991 multiple, Port, is a sculpture with a hand-painted image of a sky in the centre. The work is s sculpture of, a painting in and a surrogate for a porthole window.

Hamish Fulton (born 1946) is a British walking artist. He translates his walks into a variety of media, including photography, illustrations, and wall texts. He has been quoted as saying, 'A walk has a life of its own and does not need to be materialised into an artwork. An Artwork may be purchased but a walk cannot be sold'. Since 1972, he has only made works based on the experience of walks. The text of the exhibited piece is: 'BLACKFOOT / A 14 DAY WALKING JOURNEY 14 NIGHTS CAMPING / ALONG THE NORTH SHORES AND BLUFFS OF THE MILK RIVER / DOWNSTREAM RETURNING UPSTREAM / STARTING ON THE SEVENTH DAY OF THE SEVENTH MONTH / TEN DOORS FACING THE SUNRISE EACH DAY / ALBERTA CANADA 1999'

For Vik Muniz's series entitled Pictures of Dust, he used installation photographs of large-scale Minimalist and Post-Minimalist sculpture from the files of the Whitney Museum of American Art as his inspiration. He then collected bags of dust from the museum's vacuum cleaners, with which he painstakingly copied his source material. The result is a perceptual hall of mirror-images of drawings in dust from photographs depicting tons of geometric sculpture. Muniz's conceptual gesture brilliantly enfolds a single stylistic transition from the history of art-from Minimalism's primary structures and industrial solidity to the scattered 'anti-form' fragility of what followed-into his own dance with dust, suggesting the ultimate ephemerality of all movements. In its largest sense, the works also demonstrate the interplay between order and chaos that is at the heart of not only what Muniz depicts but his own art as well.

4 new artworks have recently been added by Krakow Witkin Gallery.
Sign up now to be among the first to know when new artworks are added.