Alice Anderson's performative practice engenders wire sculptures, pastels, drawings, and corten capsule, aiming to answer the big issues produced by digital evolution concerning our relationship to the world and the other.

The fields opened by 21st century's technical progress questioning human condition as enriched and defied, has led Anderson to re-read ancestral cultures in which the primary senses are put in a sanctuary and celebrated. This is the case, for example, for the Aruacos culture in the Sierra Nevada, Colombia and its relation to nature, universe, and the spiritual action of weaving.

Alice Anderson did her first solo exhibition in 2011 in the Freud Museum, London. These sculptures and performances were presented at the Whitechapel Art Gallery in 2012, at the 55th Venice Biennale in 2013, at the Wellcome Collection London and at the Espace Culture Louis Vuitton in Paris, 2015, at the Saatchi Gallery and the Royal Academy of the Arts in 2016 and at Drawing Room London and Centre Pompidou in 2017. 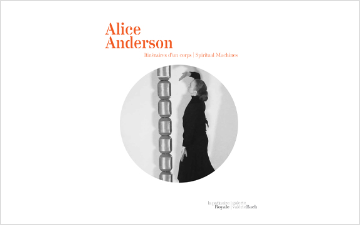