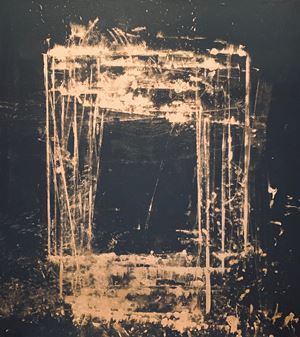 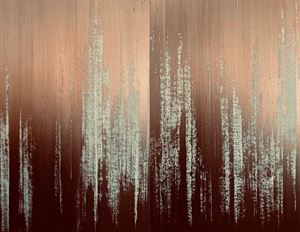 During the last years Alice Anderson has developed performative rituals.

'From the total connexion felt in Sierra Nevada, Santa Marta in Colombia to through the knowledge of the 'Aluna' (form of cosmic consciousness, source of all form of life, all intelligence and all the spirits in nature) that is at the centre of the system of belief Kogi, my research directed me towards a re-appropriation of our relationship to the world now integrated and governed by the complex technological systems that shape our lives'.

'Empirical Sounds' is an installation made of a hundreds of same-size paintings in which were retranscribed some 'virtual presences' generated by machines or connected objects. May coming from simple sounds, vibrations, waves, frequences that were ritualised through a copper painting on a canvas.

Anderson guided by her own energy, she let the brush run across the paper without printing intention. Working bare foot-in osmosis with the energy of the ground-she begins by setting down a large black paper on the floor, then adding a canvas to only focus on the later in order to re-transcribe sounds that surround her. During the process, under the effect of the performed gestures to generate the 'Empirical Sounds', another important ensemble appeared simultaneously.

When the work is finished, Anderson takes off the dry canvas from the black paper and stores the later for the quality of elements that appeared on it, considering it as a 'Free Composition' which is similar to the sound composition of the shape of the canvas.

The same way that the sounds rhythm and impact the daily lives and gestures of the artist, they also impact the borders of the canvas and continue to resonate on the black paper whereas the original shape has been removed.

This 'abstraction' formalises a profound spirituality and an intrisic autonomy where the spirit is inscribed in the gesture.

The resulting patterns on the black paper give access to a language that goes way beyond a technique, the ensemble from this process reveals the sacred dimension of the paintings that echoes with the one of the metallic-wire sculptures.

On one hand the installation 'Empirical Sounds' reflects on the storage rooms of raw computer data in networked servers localised in countries around the world, on the other hand the 'Free Compositions' pave the way for alternation where the mistake is no longer a mistake.

In a society that produces data and algorithms inherited from initial values often discriminatory (gender, race, disability, and economic models...) furthermore Anderson considers that those elements as arbitrary with no apparent value or that they should have been rejected.

This work question this model of contemporary lifestyle governed through 'data management' that condition everything that we experience and soon to our own DNA hybridisation.

Alice Anderson is an artist/performer. Her work generates drawings, paintings and sculptures. The research of the artist on the body through through the progress of artificial intelligence has oriented her towards Colombia's and Japan's ancestral cultures.

Sign up to be among the first to know when new exhibitions by Alice Anderson or at La Patinoire Royale – galerie Valérie Bach open.
Sign Up