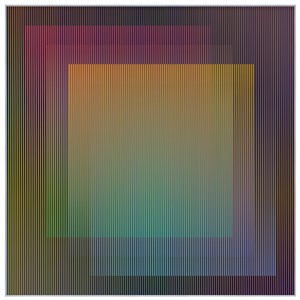 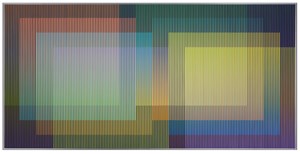 La Patinoire Royale - galerie Valérie Bach will host in April 2019 the first solo exhibition of Carlos Cruz-Diez in Belgium for more than 50 years. Entitled Labyrinthus, this exhibition is an invitation to explore the various paths drawn by the artist to apprehend the perception of colour in its pure state.

Immersive and monumental, the central piece entitled the Labyrinthe de Transchromie is in line with the first Environements designed by Carlos Cruz-Diez in 1965. The work draws in its title Transchromies (literally 'through colour') a course which transforms and transfigures the surrounding reality. The spectator wanders among transparent coloured planes and discovers the combinations of chromatic subtraction meticulously orchestrated by the artist.

Once is not custom: this Labyrinthe is a space open to the ambient light and the richness of the surrounding spaces. A space where one can linger, come back and rediscover a chromatic spectacle constantly renewed.

This exhibition brings together a selective panorama of Physichromies (Caracas, 1959/2019), Transchromies (Paris, 1965/2019) and Chromointerférences Spatiales (Paris, 1964/2019), all of which allow the spectator to discover his capacity to create, by his own perceptive means, colours that are not present on the support of the work.

Carlos Cruz-Diez is a French artist of Venezuelan origin, born in Caracas in 1923. He has lived and worked in Paris since 1960. He is one of the major actors of the optical and kinetic art, artistic current that claims 'raising awareness on the instability of the real'. His research makes him one of the twentieth-century thinkers of colour.

Carlos Cruz-Diez's plastic discourse is based on the chromatic phenomenon conceived as an autonomous reality that evolves in space and time, without the help of form or support, in a continuous present.

His works are present in the permanent collections of prestigious institutions such as: the Tate Modern, London, the Museum of Fine Arts, Houston, the Wallraf-Richartz Museum, Cologne, the Museum of Modern Art (MoMA), New York, the Musée d'Art Moderne de la Ville de Paris and the Centre Pompidou, Paris. 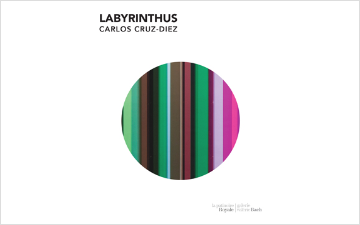 Sign up to be among the first to know when new exhibitions by Carlos Cruz-Diez or at La Patinoire Royale – galerie Valérie Bach open.