With her very first exhibition in Brussels (and incidentally in Europe) which is hosted at la Patinoire Royale - galerie Valérie Bach, Gisela Colon rips apart the great white veil of our contemporary art world with her, let's face it, truly groundbreaking works. These extraordinary iridescent curved shapes, made of her own take on blow-moulded acrylic techniques, reveal tangible futuristic anticipation, toying with our visual perception using the very properties of light. Here the infinite variations of light and colour show themselves as one moves around, depending on the angle from which it is viewed. The eye is delighted while all our certitudes come crumbling down.

Gisela's brilliant production has grown from the crossover between Californian minimalism and the kinetic art of the 60's, taking shape in Los Angeles where she lives and works. Her work resides precisely within this research of pure shape and colour, perfectly aligned with the Light and Space Movement started in the early sixties by West Coast artists such as James Turell, Bruce Nauman, Craig Kauffman, Robert Irwin, etc. Their artworks were then (and continue to be) true to their own nature, perfectly autonomous objects, inspired by the light and colours unique to Southern California: these shapes appear in all their glory, in their absolute purest form, without engaging the viewer's own subjectivity.

Gisela's works, on the other hand, calls upon the involvement of the viewer. Through this shift she engages the optical kinetic art of the sixties, directly inspired by Carlos Cruz Diez (to whom the Galerie Valérie Bach concomitantly devotes a significant retrospective, precisely due to his proximity with Gisela's work which she acknowledges and claims as her own heritage), Horacio Garcia Rossi, Gregorio Vardanega, Karl Gerstner, Antonio Asis, Rafael Soto or Julio Le Parc.

Through his bodily movement in front of the art piece, the looking subject modifies the looked upon object; from this dialectic between subject and object raises the notion of participative work, the viewer becomes an actor of the work of art. His very position modifies and subjectively alters the ambiguous and individual way the viewer perceives the object. The movement, which is also the time of the movement, modifies his vision: we are indeed concerned here with optical kinetic art, which introduces a fourth dimension, the Time dimension. The whole originality of Gisela Colon's work resides in this synthesis between minimalism and optical art, which we may therefore qualify as 'kinesthetic'.

These essentially wall-suspended cells possess their own life from within, an organic-like capacity of mutation, an oath taken on the future, mirroring cells, placental plasmas, cosmic eggs, incredibly attractive and equally inspiring. Mesmerising and mysterious, her works also have a soothing quality linked to archetypal vital forms, awakening deep inside our unconscious mind the image of vitality itself, a secret biology, so feminine with its rounded, maternal, comfortable, slightly undefined shapes. Some will see cells; other might see matrices or even pairs of eyes...All these womanly curves caress our retinas, tangled in an extremely seductive and appealing chromatic blur, not eluding either poetry, fantasy nor dream.

In keeping the various manufacturing procedures and both the technical and material components completely secret, Gisela invites us to surrender ourselves to a day-dream state of reverie while facing these art works from the future, definitely adhering to this post-contemporary era where opening yet another dimension among her works, these brand-new creations of static 'monoliths' are organised around a genre theme. These 'menhirs', made of the same materials and techniques as the 'Pods' series, immediately evoke phallic shapes from the oldest ages of prehistory. If her cells talked about a deeply buried femininity, her iridescent monoliths immediately refer to virile creative power, oozing vital energy. To some degree, both her productions are intimately linked as they use light and colour to reduce the gap between genres. Here, universality of visual perception merges different sexually defined shapes together, acting like a powerful binding agent strong enough to make frontiers vanish.

Gisela Colon's complete body of work is marked by these questionings, both contemporary and deeply human, about nature and our perception of it, about sexuality and life, which are, in sum, one and the same thing.

These pure shapes and celestial colours borrowed from the rainbow are philosophical projections of a single thought whose sole purpose is to solve itself, allowing perception in its purest form, as it becomes disembodied from all functions, to be its own justification.

But it would be quite reductive to consider Gisela Colon's work as a simple manifestation of a state of perception, as a materialistic phenomenology aiming to induce wonderment or aesthetic satisfaction. Far beyond these considerations, it's about detecting the intricacies of life, questioning the mysterious creative energy of the Big Bang, which here is little more than light, in a primitiveexplosion of colours.

With this exhibition, Gisela Colon asserts her status as a demiurge artist, not unlike Râ, this Egyptian god whose light maintains the circle of life. What finer reference can be given to an artist than that of the god who created the first civilisation? 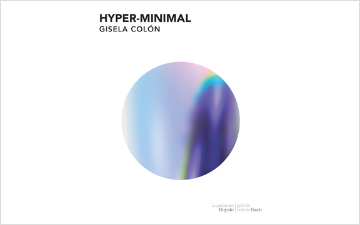 Sign up to be among the first to know when new exhibitions by Gisela Colon or at La Patinoire Royale – galerie Valérie Bach open.