Anya Gallaccio (b. 1963, Scotland; lives and works in London and San Diego, CA) creates site-specific installations, often using organic materials as her medium. Past projects have included arranging a ton of oranges on a floor, placing a 32-ton block of ice in a boiler room, and painting a wall with chocolate. Due to the nature of these materials, her works undergo natural processes of transformation and decay, often with unpredictable results. Referencing the art historical genre of landscape painting, Gallaccio’s work is heavily influenced by her own environment. In 2008, she moved from London to southern California, resulting in a shift in materials as she responded to the landscape of the western United States. Since then, she has become more focused on geological history and uses local rock species like limestone, sandstone, and granite as her materials. Her work references both the minimalist structure of artists such as Carl Andre and Donald Judd, while following artists such as Robert Smithson in the tradition of Land Art. As part of the generation of Young British Artists, Gallaccio was included in the now legendary 1988 exhibition, Freeze, curated by Damien Hirst at the London Docklands.

In 2003, Gallaccio was shortlisted for the prestigious Turner Prize. In 2018, she will participate in the 21st Sydney Biennale. 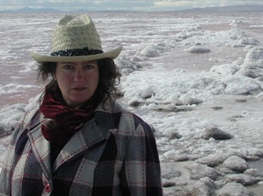 Ocula Conversation  |  in partnership with the 21st Biennale of Sydney Anya Gallaccio By Lola Pinder and Alexie Glass-Kantor, Sydney

Anya Gallaccio's practice is characterised by the twin notions of control and transition and, in particular, how each can be implemented and represented. Her approach often involves setting in motion a process and then letting go. Her use of materials that innately decay, melt, rot and transform, speak to the mutability of material and place. The... 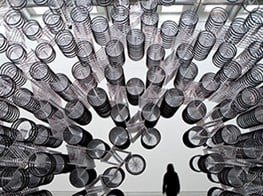 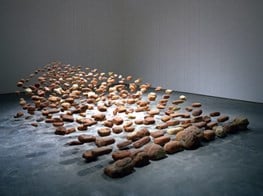 There has long been a profound and complex relationship between sculpture and architecture, with many artists encountering or breaking down a boundary between the two disciplines. Yorkshire Sculpture Park, Wakefield, questions what we know and understand about design through [Re]construct, a group exhibition selected from the Arts Council... 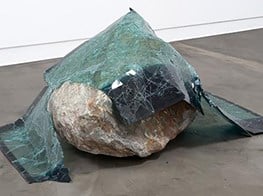 Anya Gallaccio is known for installations that employ organic materials that are subject to change and decay—flowers and fruit, sugar and ice—even as her work is inflected with a minimalist vocabulary suggesting durability and timelessness.  Recently she has begun working with stone, exploring the sense of time embedded in...