Born in Canton, China in 1913, George Chann moved to the US in 1922. In 1932 he studied at the Otis Art Institute on scholarships and earned his M.F.A. in 1941. The following year he held his first solo exhibition at the California Art Club in Los Angeles. Chann held an exhibition at the Palace of the Legion of Honor in San Francisco in 1942. He lived in mainland China from 1947 to 1949, exhibiting at the Public Archives Hell in Guangzhou and in Shanghai. He returned to the US in 1950 where he began to study abstract painting.

Chann's career in art began in the early 1940s. His works at this stage were mostly on social realism, demonstrating the compassionate humanitarianism and the concerns for one's nation. In the early 1950s, Chann started to emphasise his Chinese identity and cultural roots through his creations after returning to the US. He got his inspiration from Chinese characters and ancient antiques.

For these works, the most commonly applied techniques included black-bordered white calligraphic characters pasted in layers over a light gray-blue background, which were then pressed, rubbed, or scratched so as to break the characters apart. In this way, all elements on the canvas were mixed together into a primal state where top/bottom and image/background became difficult to distinguish. In the 60s, despite the scarcity of Chinese characters, the overall formal aspects of these works nonetheless directly echoed the Abstract Expressionist spirit. In Chann's later abstract paintings, he demonstrated his keen sense of colour and capacity for creating order out of chaos, while at the same time proving the meticulous yet nevertheless lyrical artistic qualities of a pure abstract painter. By this time, written words and symbols were no longer present, and the 'writing' had become purer, freer, and more organic. In constant streams, or broken fragments, or perhaps overlapping and intermingling, diaphanous white lines wending through and around blasts of colour, the complete communion of patches of colour and shimmering lines, sing together like notes and melody. His abstract progression, initially fashioned upon the symbols of cultural sentiment and historical memory, progressed toward the polished visual vocabulary of formal freedom and textual richness. 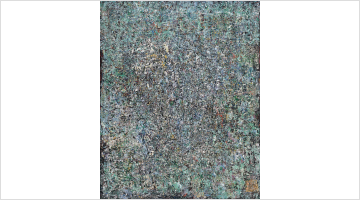 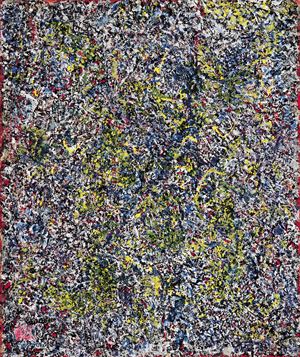 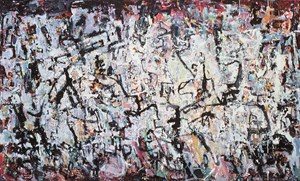