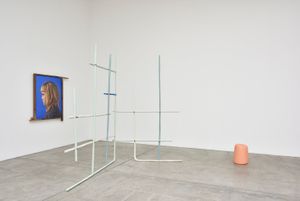 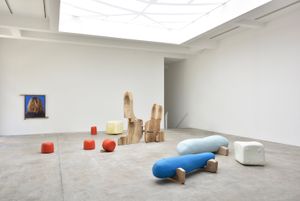 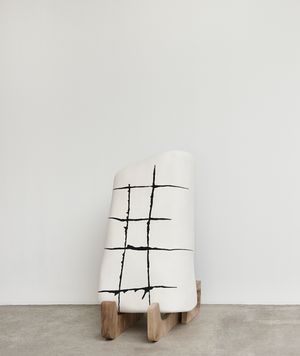 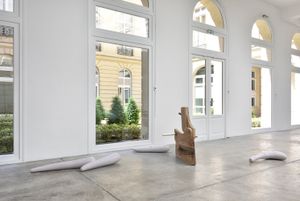 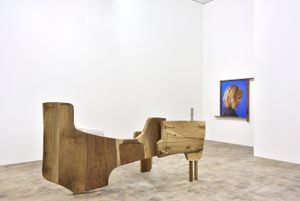 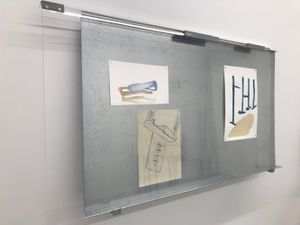 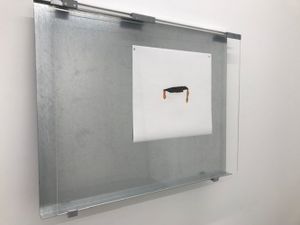 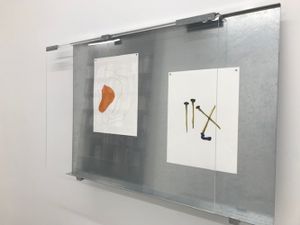 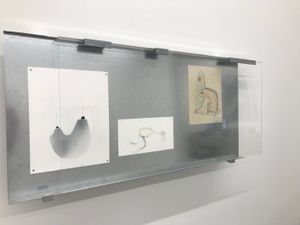 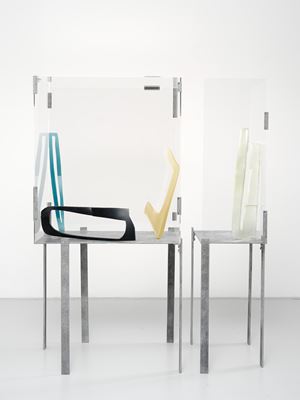 'The sculpture should have the chance not to fulfill expectations.'

Marian Goodman Gallery is pleased to present the first solo exhibition by Nairy Baghramian at the Paris gallery, opening from 10 June through 24 July. For two decades, Nairy Baghramian has been conducting rigorous formal and conceptual research, investigating the relationship between architecture, object and the human body. In her reflection on the political potential of the sculptural form, she focuses on the importance of the physicality of the work, which embodies ideas and theoretical assumptions through its specific formal, material and presentational features.

The gallery show coincides with an exhibition at the Galleria d'Arte Moderna (GAM) in Milan organised in collaboration with Fondazione Furla that runs from 25 May to 26 September. The sculptures from the 'Misfits' series are based conceptually around the idea of the playground and its limitations. They comprise two formally distinct but interdependent parts: in varnished aluminium and carved marble for the exhibition in Milan, and in similar aluminium casts and carved walnut wood in Paris, both groups accompanied by photographic works.

The new sculptures were inspired by assembly-building toys designed for young children: at first glance the two parts of each sculpture appear to fit together when in reality they do not. This evokes disappointment, frustration, and the feeling of failure experienced by playing with a toy that does not function. Baghramian argues that, within the framework of educational, social constructs and the reading of sculptural forms, the handling of the dysfunctional should be appreciated. The moment of the supposed final comprehension should be given space and not be determined as a transitional state in favour of harmony and the functional. With visual and playful trickery typical in her work, Baghramian makes a connection with the notion of 'misfits,' those who fail to adapt to their social environment and remain marginal, a concept that could apply to her artistic practice in general, in which her works often do not turn up where expected, but inhabit more unpredictable spaces at thresholds or walkthroughs.

At her exhibition at Galleria d'Arte Moderna in Milan, she responds to the unusual circumstance that the exhibition spaces have windows that reveal a garden which is reserved exclusively for children and the adults who accompany them. This unexpected admission rule inspired her to think of a playful mise-en-scène in which her sculptures are arranged not only inside the institution but also outside on the secluded museum terrace. The marble sculptures are placed outside while their varnished aluminium counterparts are placed inside, further intensifying the potential frustration of being excluded.

In Paris the gallery exhibition turns inward and focuses on the relationship between the subject and the sculptures. The scenery invited to create a room of one's own in which to release pressure and loose posture. Baghramian evokes a briefly abandoned playground in an almost cluttered, less structured installation, by bringing together the varnished aluminium sculptures with abstract elements made from wood from the walnut growth of Craig McNamara, the son of the former U.S. Defense Secretary, materials which were introduced in Danh Vo's project at Marian Goodman Gallery in London (2019).

'Jumbled Alphabet', a series of photographic works, hint at training tools for children learning to read. The standard portrait of a child's happy face has gone awry, revealing an even more truthful representation of the sitter than the conventionally staged portrait would have done. The girl's grumpy expression embodies l'enfant terrible; the rebellious child who refuses to play by the rules.

The Paris exhibition is accompanied by a presentation at Librairie Marian Goodman, where Nairy Baghramian is showing a selection of drawings from her 'Side Leaps' series first shown at the Marian Goodman Gallery in New York in 2019. These drawings, done in pencil, ink or gouache on paper, are preparatory works for sculptures that will never exist, sketches for phantom works one might say. The 'Side Leaps' drawings and models are the subject of a new book published by the gallery, which features numerous illustrations as well as a text on the artist's work by art historian and curator Miwon Kwon and a conversation between Nairy Baghramian, Marian Goodman and Philipp Kaiser, Chief Executive Director of Artists & Programs at the gallery.

Baghramian was a nominee of the Hugo Boss Prize 2020 and has been the recipient of the Malcolm-McLaren-Award with Maria Hassabi (2019), the Zurich Art Prize (2016); the Arnold-Bode Prize, Kassel (2014); the Hector Prize, Kunsthalle Mannheim (2012); and the Ernst Schering Foundation Award (2007).