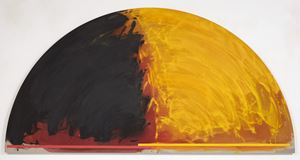 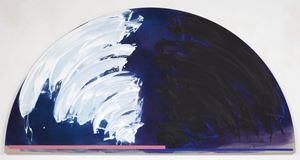 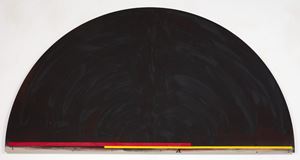 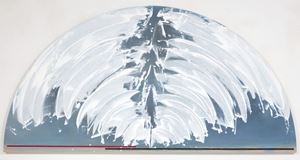 Michael Lett, in association with Two Rooms, is pleased to present an exhibition of four major new hemisphere paintings by Gretchen Albrecht.

For a number of years, Gretchen Albrecht had a postcard of Goya's portrait of actress Antonia Zárate pinned to the wall of her studio. She first saw the work at the National Gallery of Ireland, and immediately fell in love with the striking colours. The uninterrupted time in her home studio enforced by 2020's lockdowns saw Albrecht return to her Goya catalogues, and the postcard image of Zárate was joined by two other Goya subjects, María Cayetana de Silva and María Josefa Pimentel, to form the basis of four new paintings.

The result is a dramatic new series of hemispheres in which Albrecht pays homage to Goya's portraits of these three women. Not seeking to represent the literal or the particular, Albrecht instead offers a nuanced and expansive response to the Spanish romantic painter's work.

Sign up to be among the first to know when new exhibitions by Gretchen Albrecht or at Michael Lett open.