Gene Davis was born in 1920 in Washington, D.C., where he lived most of his life. After starting a career as a sportswriter and later becoming a political journalist in the 1940s; Davis began to paint in 1949. His first art studio was his apartment on Scott Circle and later he worked out of a studio on Pennsylvania Avenue.

Davis’s first solo exhibition of drawings was at the Dupont Theatre Gallery in 1952 and his first exhibition of paintings was at Catholic University in 1953. Though he worked in a variety of media and styles, Davis is best known for his acrylic paintings mostly on canvas of colorful vertical stripes, which he began to paint in 1958.

Davis began teaching in 1966 at the Corcoran School of Art, where he became a permanent member of the faculty. In 1974, Davis was awarded the John Simon Guggenheim Memorial Foundation Fellowship. In 1984, he was appointed the commissioner of the National Museum of American Art, Smithsonian Institution, Washington, D.C. 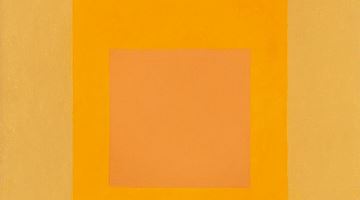 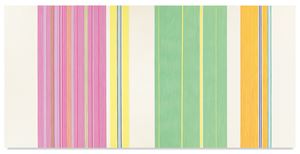