Mind Set Art Center is honoured to present the first solo exhibition of LEE Ming-tse, Serendipity at the gallery, which composed of more than 30 pieces of mixed-media works the artist completed in the recent two years. It is again a breakthrough of the artist's creativity after his major solo exhibit entitled I Love Taiwan and Love Southern Taiwan Even More with Kaohsiung Museum of Fine Arts in 2009. The opening reception will be held on 4 July at 3pm. You are cordially invited to this event.

Serendipity concludes LEE's a series of renderings from antiques collecting to objects mingling and painting. How he infuses and transforms the local culture and aesthetics from objects he collected into the appearance of contemporary art marks the distinctiveness in his practice. A practice to blend folklores into creative spirits. His obsession with object collecting as an artist also an art critics CHEN Shui-tsai wrote: "LEE Ming-tse is always fascinated with collecting old stuffs; any object in profound recollections becomes his target to hunt. In a way, collecting is very important part of his life. He is a man of obsession with old things. Beside festival items, his collection as well includes sculpted board of meridian chart, images of Taoism and even broken iron pots, rusty irons, chair frames, shattered concrete panels, junks that he has searched and found. To the artist, "festival objects", "old stuffs", "rotten wood", "junks" ... all are "treasures" after being picked and placed." On top of that, objects tempered in elapsed time become unique and irreplaceable as every man's life is different. In Serendipity, the artist begins with object collecting and in turn, redirects to reflections of humans.

Through the process of precipitation, observation, contemplation, and recreation, he uses paper pulps as the medium to associate objects with paintings. Paper pulp is not only applied to mend the wood fragments but also filled in the decays. The pictorial depictions freshly drawn on paper pulps seemingly revive the object that once in glory but has been lost in this day and age. The new entity appears in a form of ancient relics to encounter with Dandy's literati variant of life and another scope of Jianghu. Serendipity also like a time tunnel leads us to cut across the time-space boundary and revisit the everlasting golden age in our memories... 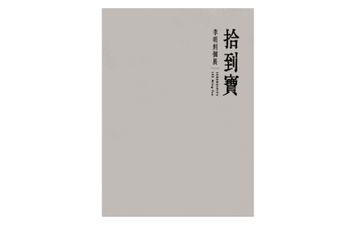 Sign up to be among the first to know when new exhibitions by Lee Ming-tse or at Mind Set Art Center open.
Sign UpLogin