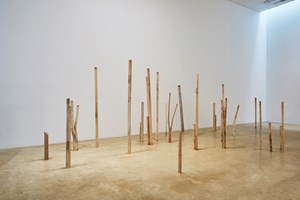 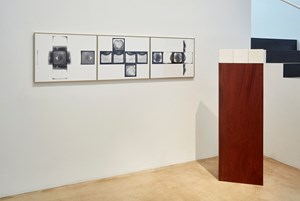 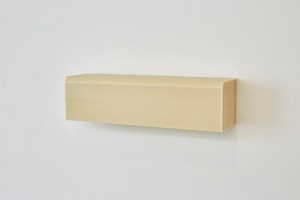 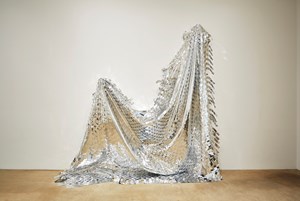 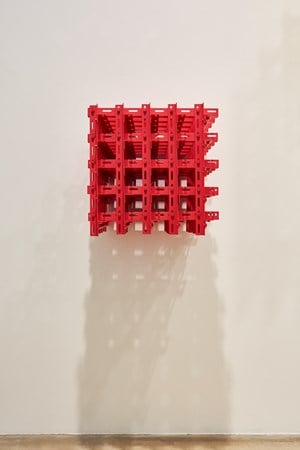 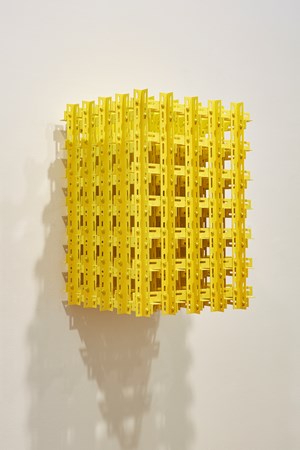 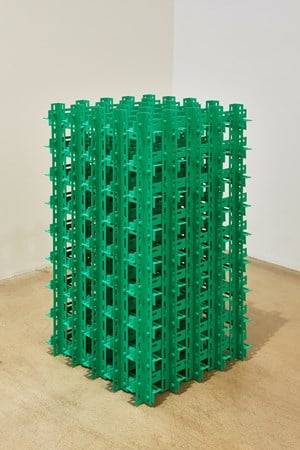 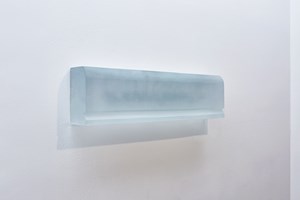 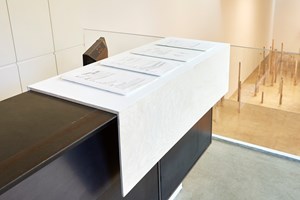 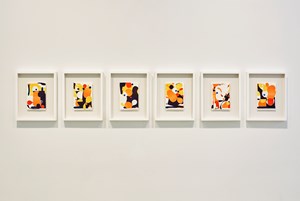 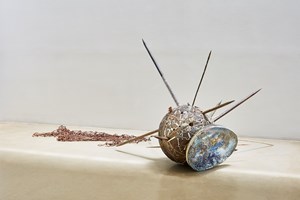 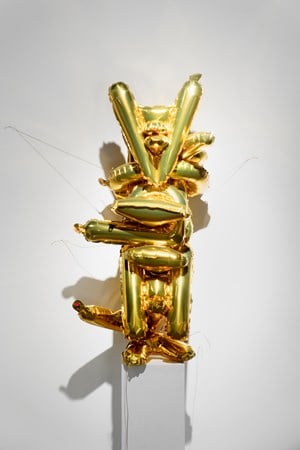 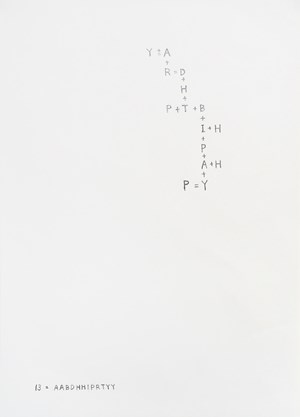 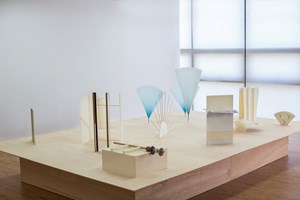 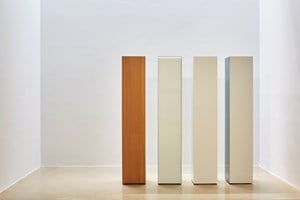 The exhibition We Don't Really Die emerged from the lines of Lucy, the main character in Luc Besson's film. The line, which has been hovering in my mind, transformed into an interest on non-matter, then wandered from place to place to reach thoughts on sculpture, which ironically is difficult to imagine without matter. Making a near-conspiracy statement that what makes a sculpture is in its non-materiality. The background of the argument is as follows. Going from two to three dimension, three to four dimension, moving towards a higher dimension is only possible when leaping beyond the common sense accepted as a human being. It requires conceptual understanding much beyond human thought and language. But no matter how rational it may be, what is certain is that we detect 'something' that pops through the membrane of a torn dimension. However, trapped in language, we continuously fail to interpret and explain it. So, came the sculpture?! Sculpture, which rips out of the two-dimensional shroud into the three dimensional, struggles to achieve its position in the higher. (I want to insist on one more thing, painting is also sculpture.) That is, sculpture exists in the stage of moving towards a higher dimension, through the mediation of the immateriality it has. Thus, the exhibition takes pleasure in accepting the indefinite state of the boundary, assuming that there is no way to establish the border between atoms and energy that make up the material and that the visible form of the object is not equal to the boundary of the object. It also assumes that both the context of the work and the attitude of the artists are energy that has passed through time and space, suspended somewhere in the artworks. Experimenting under what conditions they will be most optimally activated. Multiple layers of the works are paralleled, overlapped, or crossed, inside the exhibition space, reappearing as a sculptural characteristic of 'dimensional weaving.' The physical conditions and narratives of the pieces, which are considered in different layers, enter a unified sensation through the detection of different dimensions trespassing momentarily within the three-dimensional weave.

Discarded goods brought to the gallery by Goeun Choi, are out of date, and out of fashion, possessing the appropriate condition to be transformed into an artwork. These products do not exhibit higher value of technological transition as in Walter Benjamin's utopian promises, nor were they destroyed by another technology transition, but are just inadequate 'cadavers' that once filled up our daily lives then quickly disappeared, however, on the other hand, are the evidence of intolerably trivial aesthetic values. On the other hand, yesterday's trend-setting products, art historically pass through minimalism, highlighting the fact that minimalism is now also old fashion once decorating the interiors of another class, allowing a self-deprecating look at the values of the popular and high-class culture that's been mixed up and discarded by capitalism. Meanwhile, Goeun Choi's works carry theatricality that is hard not to acknowledge. Perhaps because of the familiarity of its form and volume, and the awkwardness of the space in which it is placed stimulates us at the same time. The borrowed shapes from furniture as in The Sum, designed to fit well in the living space, suddenly emerges as soon as the direction the gaze shifts, making simple forms and events unfamiliar. Made in glass, Ernest Rapeneau also creates two entirely different sensations associated with its familiar forms simultaneously, confusing the interpretation of the immediate phenomena.

Seung-yul Oh unravels his attuned sense of space and flows through his collage work and woven aluminium tapes of weft and warp. In his works, two contradictions coexist, such as 'connection/disconnection' and 'lubricity/friction.' At a glance, eyes see that the woven aluminum modules carry square cut lines, but perception soon acknowledge that the module extends to a long single line. These two senses seem to be contradicting, but suddenly the opposing senses complement each other and persuade us that all is correct. The boundaries and differences seem very clear—as if every blink of an eye jumps you into a different scene, or gazing into overlapping worlds at the same time—but at one point the contradiction becomes unified through odd feelings and sensations. His collage work, made of stacks of layered colour paper, is reassembled through Risograph. The layered colours of the paper also hold two opposing sensibilities of torn, jagged edged and three dimensional, or articulated and printed flat. The artist observes and wanders the space between the thin layers, increasing the density of the space with his works.

Jiyoung Yoon's question arises from the persistent observation and questioning of the phenomenon. Observed phenomena become abstract and conceptual questions and then reappear as material by the artist, then again as a phenomenon, where the first and last coexist in the same concept but show differences. While differences inevitably arise from the process of verbalizing, visualizing, and materializing the invisible, it is impossible to measure the difference from the perspective of the viewer, since the artwork is the only thing presented by the artist. However, the artist's suggestion could be used to reverse and discover, it too, has a considerable margin of error from the artist's initial discovery. Jiyoung Yoon once again questions this 'error.', and propel ways to reduce the margin, but ends up failing every time. This repetition of attempts brings to mind Beckett's phrase 'fail better.' Perhaps the artist continues to pursue repeatedly not for success but towards a more significant failure.

The two works shown in the exhibition A Wooden Cube, approx. 15cm in Side Length, Became a Plaster Cube in which Something's Negatives are Hidden (hereinafter 'A Wooden Cube'), and Dear Peer Artists 2 presents this question in two completely different manners. Wooden Cube is constantly, diligently, but eventually failing to address the unknown truth, that is, the sculpture's 'invisible side' inevitably conceived at the time of display.

However, Dear Peer Artists 2 champions all these questions and frustration from repeated failure—perhaps motivation for work— impulsively describing all ideas formulating at one point. These two works, which the artist refers to as two completely different self-portraits, show fundamental questions about sculpture and the artist's attitude as a sculptor.

Hyejin Jo brings the necessary forms of objects created within the market's production-consumption system as a source for work. In Structures, Jo attempts multilateral read of objects by tracing the forms of objects using practical data that record the patent rights called 'utility models.' In this process of reading objects, the artist may discover variations that do not conform to purpose or demand. Once perceived purposeful, the designs mutate through impulsive sensations, making this reading of objects conflict with a layer of art historical canon. Through the process of interpreting the conditions of these 'utility models' into a form of work, the once functional object is now presented afunctional in the gallery, seeking clash with market values. A Usable Tree takes the recycling approach by sculpting away temporarily used and abandoned tropical trees. The image at the time of its original use as 'tropical tree as gifts'—the time of discovery by the artist—the time when its chiseled and transformed into a piece of artwork—and the time its viewed as a sculpture in a gallery, all contained in this single piece, allows visualisation of its changing image. Its sociocultural indicators, or the face of 'capitalism' exposed through the ordinary life of the 'product' referenced by the artist, contrasts with the artwork created embracing memories of all moments creating an almost sublime experience.

Kyungwhan Kwon depicts the forms from daily life within the capitalist paradigm through the mediation of his personal life. Through multiple moves, he found interest within the process of modifying furniture to adapt to a new space, and also in life that must be adapted to the furniture again. This enjoyment is also reflected within simple lives represented by people around him and himself. For example, when a wooden stick converted into a multi-purpose prop that can well support other objects, shape and colour are always actively considered, therefore transforming the process into play. The artist also delightfully express his aesthetic through determined shapes and colours while building the various forms of furniture using the L-shaped angles—a material he can quickly assemble and use. It is not much different from the activity of creating a sculpture, and the artist gradually removes its purpose to reveal it further, emphasizing its sculptural characteristics. Formed from L-shaped angles, Domestic Sculpture - Balance is now in the gallery as a complete work of art. The artist's sense of playfulness is also found in Still Life. It is an assemblage of Taiwanese birthday balloons, light but familiar object easily found in ordinary life is composed—with artistic intention—utilising the object's properties. The artist reinterprets the circumstances of pre-conditioned living as 'a gesture of assembly exercising conditions' and as a discovery of play embedded in the process.

Lucy changes her body freely from the middle of the movie, then disappears entirely at the end leaving the message 'I'm everywhere.' Yes. Even if it's invisible, everything is around us all the time, not vanished. Just as sensation and perception are energy reactions, words spoken, hands touched, times passed, and the lingered gaze is still present everywhere. If we can understand the higher dimension, it may be easier to comprehend, but it won't happen. But we are constantly looking for the gap. In the bizarre crossroads of medium and post-medium, sculpture tries to overcome its misunderstanding as 'medium specific' and attempts at a higher dimension. It is stuck within the constraints of language and short of reach every struggle. Beckett's 'fail better' - often misinterpreted as 'breakthrough failure' - could be applied here as well. Worse, fail better. We're not really going to die anyway.

3 new artworks have recently been added by One And J. Gallery.
Sign up now to be among the first to know when new artworks are added.