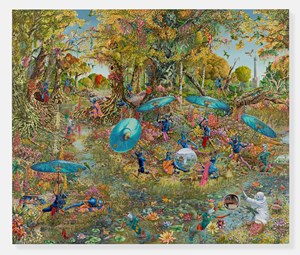 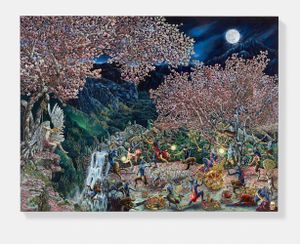 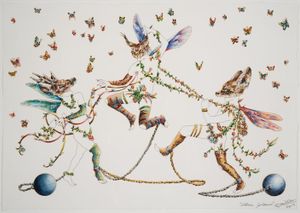 Pace is honoured to present the first exhibition of paintings by Raqib Shaw at its Geneva gallery. On view 8 June–7 August, Raqib Shaw: Reflections Upon the Looking-Glass River brings together a suite of recent paintings made while in lockdown. Presented in dialogue with one another, these intricate paintings speak to the most pressing themes of contemporary life: beauty, kindness, cruelty, loneliness, contentment, loss. This exhibition will be accompanied by an illustrated artist publication with an introduction by Shaw.

The lockdowns of 2020 and 2021 afforded Shaw more time to devote to his passions. In paintings such as Lockdown Bliss, Shaw is depicted reading under the moonlight with his beloved dog. Shaw also used the enforced time at home to tend to the garden of his South London home-studio. Inspired by the landscape of Kashmir, Shaw hand-built an elaborate alpine rockery from over 70 tonnes of rock and soil with a cornucopia of flowers, shrubbery and miniature trees; serving as both a tranquil oasis from the bustling city and a stage set for his ornate paintings. Borrowing its title from the 1885 poem by Robert Louis Stevenson, Raqib Shaw: Reflections Upon the Looking-Glass River pays homage to the imposed 'slowness' of the last 18 months. Shaw's contemplative paintings, much like Stevenson's poem, call attention to the quiet moments of life and the knowledge that all disturbances eventually calm:

The stream and all in it

Renowned for his ornate and elaborate paintings, Shaw's work is a fusion of fantasy, mythology, realism, and biography, with direct references to Indian miniature painting and Western art history. Responding to his self-imposed exile from Kashmir, paintings such as That night in Xanadu when the birds were set free... (2019–2021) reclaim the lush landscapes of Shaw's childhood to evoke the duality of expansiveness and self-containment. At the core of Shaw's distinctive visual language is this tension between escapism and confinement, longing and exile. The global pandemic has brought this further into focus.

The paintings on view in Raqib Shaw: Reflections Upon the Looking-Glass River mark a new development in the artist's distinctive visual lexicon with the addition of London's modern cityscape. Shaw has combined his iconic compositions of acrylic liner, Hammerite and enamel with a contrasting wash of watercolour. The interplay of viscous, glossy paint with delicate watercolour enhances the sculptural effect of the former, imbuing his paintings with newfound solidity. In Final Submersion in the looking-glass river (2021) Shaw carefully interweaves the two mediums in the reflection on the water's surface, a playful comment on the fragile relationship between reality and imitation.

Raqib Shaw's (b. 1974, Calcutta) paintings and sculptures reveal an eclectic fusion of influences—from Persian carpets and Northern Renaissance painting to industrial materials and Japanese lacquerware. Shaw moved from Kashmir to London in 1998 to study art. There, a patchwork of cultural references began to crystallise in his opulent and intricately detailed paintings of fantastical worlds. His works are often developed in series from literary, art historical, and mythical sources, with specific references and symbolism in images and titles. His intimately scaled, painted bronze sculptures depict animal-human hybrids, figures that exist singularly as well as in the settings of larger tableaux. These otherworldly works bring Shaw's phantasmagorical visions into the three-dimensional realm.

Reflections Upon the Looking-Glass River

Reflections Upon the Looking-Glass River by Raqib Shaw has been open for 7 days.
Sign up to be among the first to know when new exhibitions by Raqib Shaw open.
Sign Up
}