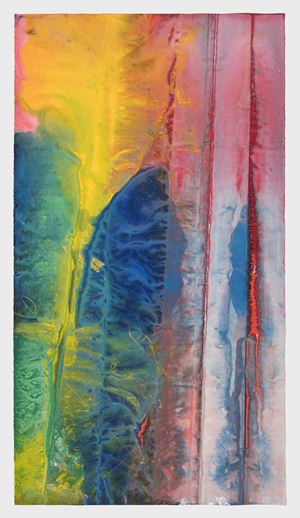 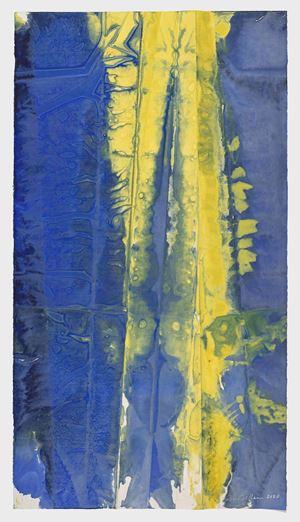 Geneva—Pace Gallery is pleased to present an exhibition of new watercolours by Sam Gilliam, on view from 21 January to 19 March 2021, at Quai des Bergues. This is the artist's first exhibition in Geneva. Since the early 1960s, Gilliam has been creating richly coloured abstract compositions using watercolours on Japanese washi, a traditional type of paper made from inner fibres of plants. The watercolours featured in the exhibition extend the artist's ongoing exploration of colour and form into a palpable entity: a physical, textural presence that reaches beyond painting's two-dimensional surface. This exhibition marks Gilliam's third solo exhibition with the gallery, following a presentation at Pace in New York and Palm Beach.

Watercolours follows The Music of Color, an exhibition of Gilliam's work presented at Kunstmuseum Basel, Switzerland, in 2018 and curated by Jonathan Binstock and Josef Helfenstein. His work was also included in Pattern, Decoration & Crime presented at Musée d'art moderne et contemporain (MAMCO), Geneva in 2018–2019.

The techniques that Gilliam has explored in watercolour—staining, folding, and otherwise distressing the surface of the paper—have exerted a powerful effect on his artistic practice as a whole. While in graduate school, a professor encouraged Gilliam to experiment with watercolours on paper as a way of mitigating a sense of control in his painting. Several years later, for an exhibition at the Adams-Morgan Gallery in Washington, D.C. in 1963, Gilliam chose a single watercolour to be included in the show, marking the moment that he began to seriously consider the importance of the medium in his artistic practice.

His early approach to watercolour expanded upon the staining technique that was adopted on canvas by several other artists from the Washington Color School in the late 1950s and early '60s, including Helen Frankenthaler, Morris Louis, and Kenneth Noland. As Gilliam's practice matured, his watercolours continued to play a powerful role in shaping his own approach to the canvas, opening up a new sense of freedom and an embrace of abstraction. Since that time, Gilliam has pushed the chromatic and textural possibilities of watercolours with unprecedented verve. His works saturate the paper support with luminous pigment and transform the composition into an object, rather than an image.

In a recent interview with curator Hans Ulrich Obrist, the artist shared of his process with watercolours: 'You go with the flow, and you don't have to play just for the accidental aspect. You can learn to do deliberate things; you establish your references on the page... the real thing is not to have control of what happens, just to set it into motion. It's not to be exact so they can arrive at something.'

In Gilliam's most recent watercolours, colour and support are inseparable: the paper becomes the colour rather than simply serving as a conveyer or carrier for it. Like his draped canvases, a sense of depth in the creases and folds of the fabric is echoed in the composition of each watercolour painting. Vertical washes of colour on each flattened surface create the illusion of folds or pleats within rich and rhythmic planes of light and dark that bleed and overlap.

Like much of Gilliam's work, both chance and choice play an important role, as the application of watercolour is inherently more unruly than that of other types of paint, bleeding into the fibres of the paper and remaining resistant to the careful control that is possible with oil or acrylic on canvas. This chance echoes the artist's love of jazz, with its improvisatory ethos and spontaneity.

Gilliam's solo exhibition at the Hirshhorn Museum and Sculpture Garden in Washington, D.C. will take place in spring 2022 and will mark the artist's first museum retrospective in the United States in 15 years.

Sam Gilliam (b. 1933, Tupelo, Mississippi) is one of the great innovators in postwar American painting. He emerged from the Washington, D.C. scene in the mid-1960s with works that elaborated upon and disrupted the ethos of Color School painting.

A series of formal breakthroughs would soon result in his canonical 'Drape' paintings, which expanded upon the tenets of Abstract Expressionism in entirely new ways. Suspending stretcherless lengths of painted canvas from the walls or ceilings of exhibition spaces, Gilliam transformed his medium and the contexts in which it was viewed. As an African-American artist in the nation's capital at the height of the Civil Rights Movement, this was not merely an aesthetic proposition; it was a way of defining art's role in a society undergoing dramatic change. Gilliam has subsequently pursued a pioneering course in which experimentation has been the only constant. Inspired by the improvisatory ethos of jazz, his lyrical abstractions continue to take on an increasing variety of forms, moods, and materials.

In addition to a travelling retrospective organized by the Corcoran Gallery of Art, Washington, D.C. in 2005, Sam Gilliam has been the subject of solo exhibitions at the Museum of Modern Art, New York (1971); The Studio Museum in Harlem, New York (1982); Whitney Museum of American Art, Philip Morris Branch, New York (1993); J.B. Speed Memorial Museum, Louisville, Kentucky (1996); Phillips Collection, Washington, D.C. (2011); and Kunstmuseum Basel, Switzerland (2018), among many other institutions. A semi-permanent installation of Gilliam's paintings opened at Dia:Beacon in August 2019. His work is included in over fifty public collections, including those of the Musée d'Art Moderne de la Ville de Paris; Tate Modern, London; the Museum of Modern Art, New York; the Metropolitan Museum of Art, New York; and the Art Institute of Chicago. He lives and works in Washington, D.C.

Sign up to be among the first to know when new exhibitions by Sam Gilliam or at Pace Gallery open.
Sign Up