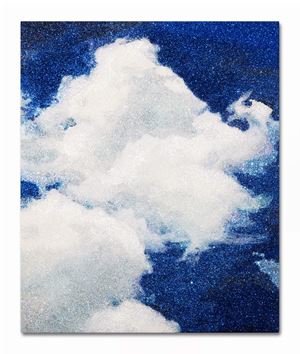 Reuben PatersonI Can (Not) Live Without You, 2019–2020Glitter on canvas
60 x 51 cm Page Galleries Contact Gallery 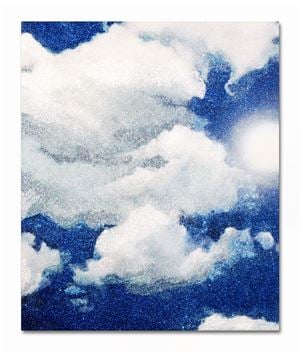 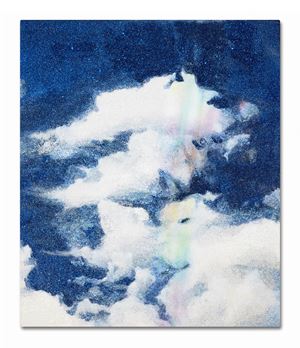 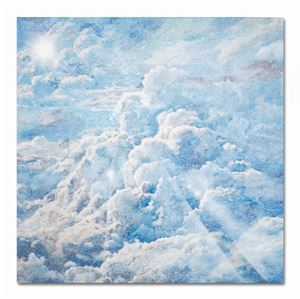 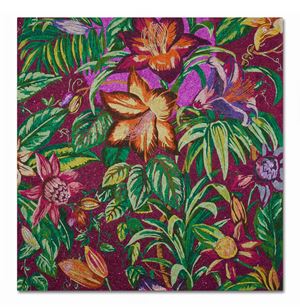 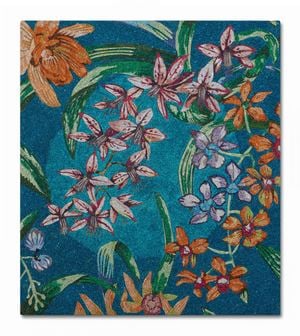 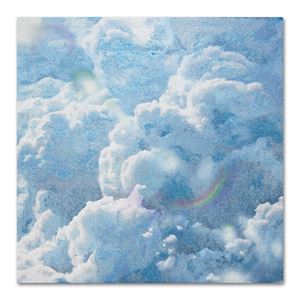 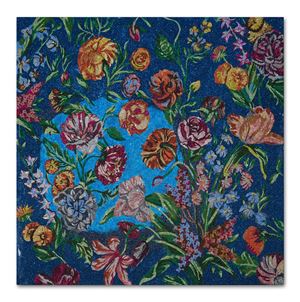 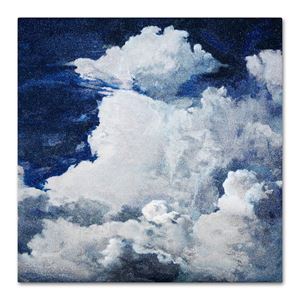 Reuben Paterson (Ngāti Rangitihi, Ngāi Tūhoe, Tūhourangi) weaves together new paintings and sculptural works that linger at the edge of visual perception and earthly understanding in his latest exhibition. You Know Who hints at moments of personal revelation, seasonal growth, and new beginnings.

Paterson's glittering cloudscapes are interposed by prismatic arcs and dazzling orbs of light; as if the materiality of the glitter itself is refracting to create this visual phenomenon. These subtle embellishments of miraculously painted light lend a sharp filmic dimension to these atmospheric scenes. In fact, these works owe something to the 1969 cult classic Easy Rider, the film widely credited as popularising the cinematic technique of lens flare, where light hits the camera lens and reflects to produce a visual flaw or form within the image. While previously viewed as a technical failing, flare became increasingly adopted as a way to impart a kind of authentic state of reality, demonstrating that a film was shot out in the real world rather than inside a studio soundstage. Here, the effect creates a network of dualities – between reality and fantasy, perfection and imperfection, connection and disconnection, the artificial and organic – that appeal to the artist's desire to create works in those sometimes hazy intermediary spaces.

A series of botanical works feature various species in glittering bloom, overlaid upon a simplified form that recalls the reflection of the moon beneath the surface of a pool of dark water, its edges rippling and slightly indistinct. Alongside these sit stacks of gourds, these sculptural works creating the connection between Papatūānuku the earth mother to Ranginui the sky father, and those symbiotic relationships between heaven and earth, dawn and dusk, and night and day. Each gourd is individually adorned with sequins; their usual earthly toned skins replaced with gleaming vivid gowns.

The titles are heavy with ambiguity and latent significance. Some address a mysterious 'you'; others read as intimate notes-to-self repeatedly revised, with lines crossing out certain words; some point to particular moments or events, or signal a new consciousness. This exhibition is tinged with both sorrow and celebration in the face of life's cyclical nature and the inexorability of change; as the earth turns on its axis, seeds germinate and new shoots push their way upward through the soil, flowers blossom, clouds part, and the sun continues to shine.

Sign up to be among the first to know when new exhibitions by Reuben Paterson or at Page Galleries open.
Sign Up