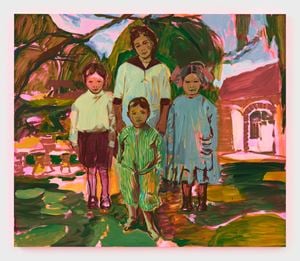 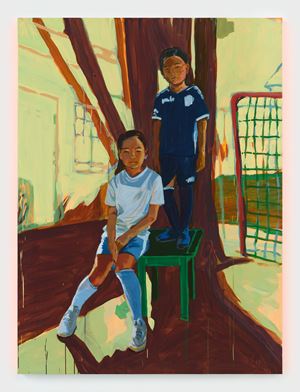 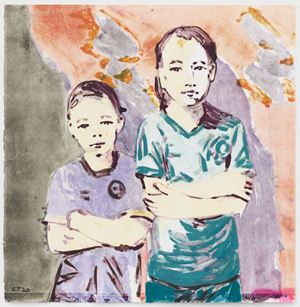 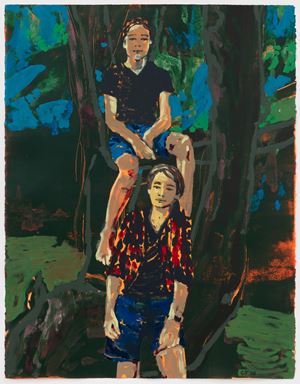 We need more and different flags.

What is the worm of the world that spoils exultation?

One who has become all eyes does not see.

To try to understand is to court misunderstanding.

Not to know but to go on.

Anything is a mirror.

There are two endless directions. In and out.1

The universal need for art... is man's rational need to lift the inner and

recognizes again his own self.2

Claire Tabouret's practice is a navigation of shifting perspectives. Each painting begins from the vantage point of the last, each exhibition from what has come before. But there is always a new departure. The portrait has been central to Tabouret's work for over decade. An expansive subject, she has approached the genre in different ways. Fluctuating between the individual and the group, the portrait has always been a vessel, a means for the artist to explore her interiority. Tabouret's gestural, fluid paintings depict figures floating in imaginary, mystical landscapes with an air of the uncanny. The people are recognisable but the narratives elude us. Illuminated by neon underlayers, her subjects glow from within as we are drawn into the artist's subjectivity.

But, as Tabouret has expressed, quoting Agnes Martin, 'There are two endless directions. In and out.' We are, as Martin quoted Pascal, 'Thinking Reeds', embodied beings inextricably connected to the external world. Our task is to attend to both the subjective and objective, the inner and outer, mind and body, self and other. For this exhibition, Tabouret has turned her attention away from the self, for the first time creating a series of portraits of 'real people'. Her subjects are siblings and the focus is the familial relationship. With this change in direction, a set of questions come into view. How can we be both connected and separate? What is it that forms individuality? Where does direction come from? Inside or out? In order to explore these, Tabouret has painted a portrait of her brother. In keeping with her practice of using found images, the portrait takes a childhood photograph as its source. Made up of subtle, translucent layers, the child's tilted face is depicted not as a fixed surface but as an indeterminate interface at once emerging and retreating from its surroundings. The ebb and flow of paint suggests transience, a porous and evolving identity that is continually being shaped. Whilst, as Susan Sontag once said, 'photographs are a way of imprisoning reality'3, of fixing and condensing time into a single frame, Tabouret's paintings are an attempt to set it free. There are no fixed boundaries, the parameters fluctuate.

Another work connected to this theme is a large-scale painting depicting four children standing in front of a house. The work is based on a snapshot photograph of a Victorian family that the artist came upon in a thrift shop. As she explained, 'sometimes you find an image and sometimes it finds you'. Intrigued by the anonymous siblings, Tabouret set about creating an environment for them. The children are embedded in a luscious garden of luminous, abstracted shapes. Though full of dynamism and potential, a sense of mystery prevails. The scene is charged and expressive yet fragmentary, impenetrable, incomplete. Invested in historic portraiture, Tabouret had been looking at a group portrait by Edvard Munch whilst making the work. Munch's enigmatic painting depicts four young girls dressed for a funeral, facing forwards as they pose against the yellow wall of his house. Following a childhood marked by loss, Munch was preoccupied by the fragility and extremes of human existence and his paintings offer a powerful expression of an inner life. A natural theme, the depiction of children was a recurrent motif. For Tabouret, Munch's portrait offers not only a composition, but a source for reflection on childhood experiences and the representation of emotional and psychological states, an occasion to ruminate on the connection between the inner life and outer world, and on the dynamic interrelation between the individual and the group. Compliant and self-conscious, the children in Tabouret's painting stand together, unified as they face forwards. Yet their individual expressions are ambiguous, at once alert and distant, watchful and reserved. Tabouret seeks to engross us into a concentrated scene of heightened reality, inviting us to make sense of this mystifying space.

One of the artist's formative artistic encounters was viewing Monet's waterlilies. The task of painting water, of capturing movement, can be likened to that of rendering a face. As the artist expressed, 'when I paint someone, I don't want them to be stuck, fixed in time. Truth is not fixed.' Rather, Tabouret's task is to give her subjects space to be alive. In an ode to Manet, as we have seen, the artist's figures are often facing forwards, beholding the beholder. An encounter with her work is a dialogue, demanding attention and ownership of the viewing process. Her works resist direct interpretation, their meaning is not immediately available, ready to be grasped and understood. Rather, her portraits invite us to engage with them in an imaginative and interrogative manner. Whilst Tabouret has turned towards the 'outer' for inspiration, allowing the external world to enter her art, we, the viewers, bring our personal reflections to it. As Martin wrote, 'anything is a mirror': the perceptible world is not objective reality, rather, it appears to each individual as seen by them. An artwork bears meaning not solely as a product of the artist's inner intention but as a product of their external interaction: as the consequence of a complex of collaborations between artist, subject, artwork, audience and world. Tabouret's portraits become living objects, taking on new meanings each time they come to be seen.

All this hints at the motive behind Tabouret's change in direction, which is a desire to connect. In a world of division and separation, the artist has associated the practice of painting the other with the act of 'caring for a person'. This outlook recalls the view held by the philosopher and novelist Iris Murdoch, who thought that the 'essence' of art was 'love'. As she once wrote, 'Love is the perception of individuals. Love is the extremely difficult realisation that something other than oneself is real. Love, and so art ... is the discovery of reality.'4 Whilst making the portrait of her brother, Tabouret had the realisation that he is the person whom she has always been trying to paint. Turning towards the outer direction, connecting with the other, has enabled the artist to see the inner life afresh.

Sign up to be among the first to know when new exhibitions by Claire Tabouret or at Perrotin open.
Sign Up