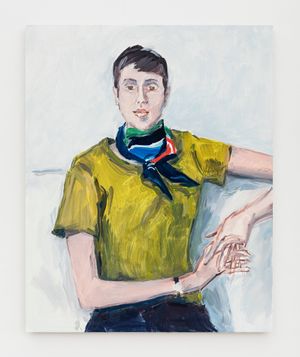 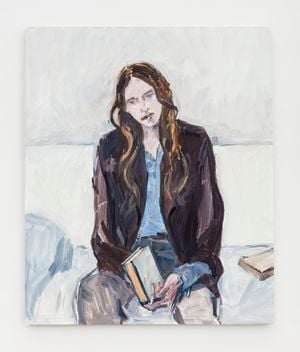 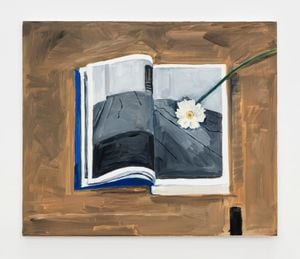 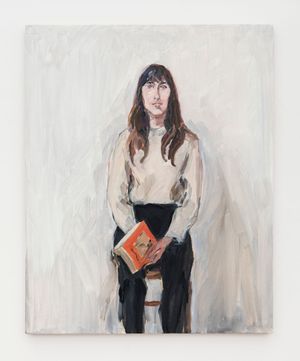 Jean-Philippe Delhomme's first solo painting show in Asia is titled Flowers for Books. It is composed of intimately scaled still life paintings that, at first sight, fulfill the promise of the title. Books, magazines and vases of cut flowers occupy his still lifes. A series of portraits, painted from life with different sitters, introduce a presence among the inanimate artifacts. Delhomme places the sitter in the semi-abstract decor of the bare studio. Flowers, books and models manifest themselves in the pictorial landscape of Jean-Philippe Delhomme that is more concept than real space. The studio is a mental space that Delhomme can control, but only to a certain degree until the sitter for a portrait looks back at him.

Two still life compositions and two portraits, both in large format, bring a pause in the half cadence—a phrase that denotes a suspended musical structure that needs continuation—of the exhibition, which is primarily made up of an open-ended series of small paintings.

By definition, books are cultural objects. Their weight and volume are secondary to their content, but also a defining feature—we remember how a book looks and can often identify a book by its spine on our bookshelf.

Flowers, by contrast, are natural, so their symbolism does not impact their appearance. But flowers turn into cultural objects when they are arranged in a vase for our pleasure. We offer flowers to celebrate certain occasions; we summon their vital exuberance inside our home and subsequently cut it short.

Flowers wither away and books remain. The implicit bargain of the title Flowers for Books is therefore a fool's market. Are the flowers an offering to the repository of knowledge held by the books? Or are they an affirmation of the superiority of the full bloom?

The quirky and sparkling surprise of the books and the flowers as they compete for the fore of the painting is very pleasurable.

The flowers and books compete with one another for the painting's central narrative, resulting in an unexpected sparking. Those still lifes are not that still, after all, and the cohabitation of the books and the flowers within the pictorial space is not fully comfortable—awkward empty space abounds with a makeshift cardboard box underneath and books flashing their colorful dust jacket.

Arranging flowers and books to compose a still life is a whole different game than painting a portrait from life. It is the articulation of the two genres—still life and portrait—that reveal the intention of the exhibition. Explaining what happens when he is painting a model sitting in front of him, Delhomme talks about the exchanged gaze: 'At the opposite of the snapshot is the arrested movement caught by the camera's eye. I'm aiming at painting the uncertainty, the durable silence, the unformulated questioning of the exchange of gaze between model and painter. The model's gaze to the painter as is.'

Flowers for Books could be interpreted as the metaphor of the painter's gaze encountering the model's eyes looking back at him, the tenuous expression and fragile equilibrium of a portrait from life. Painting without didactic intention but candor and faith in representation that eschews any form of justification. A classic situation of a painter and model in the studio but stripped of any form of power dynamic, affirming the model's presence, never denuded, never objectified with too many details. Between the risk of missing and the triumph of catching the right moment, Delhomme paintings manifest the renewed potential of classical genres. Still life and portrait are, under Delhomme's touch, the expression of the here and now, within the confinement of the studio that reflects our isolation in 2020. Delhomme, who is a very acute observer of culture, proposes an alternative narrative and demonstrates that genres such as portraiture and still life tested by a long history talk to us about the present time with urgency.

Sign up to be among the first to know when new exhibitions by Jean-Philippe Delhomme or at Perrotin open.