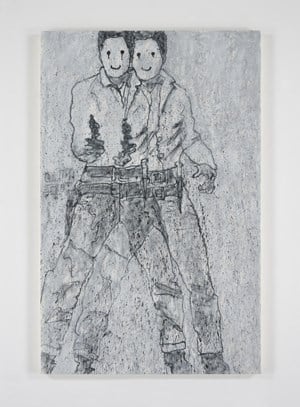 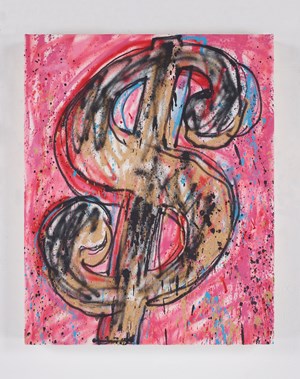 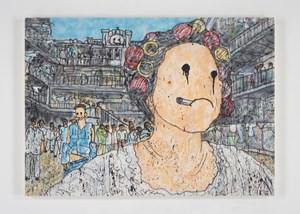 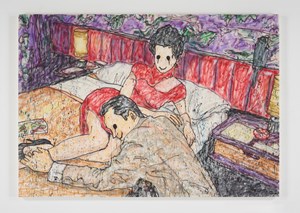 Despite its title, Andy Warhol's 1965 underground film, My Hustler, is not, as far as I can tell, one of the many cinematic references in Stephen Chow's 2004 madcap action comedy, Kung Fu Hustle. Yet, the work of these two artists—Chow and Warhol—both make appearances in MADSAKI's latest exhibition, and the two films, as different as they are, help to define the logic which structures much of his work: that of the wannabe or hustler.

The majority of MADSAKI's latest exhibition consists of works inspired by Andy Warhol, along with a selection of paintings depicting stills from Hong Kong cinema classics like Kung Fu Hustle and Wong Kar-wai's In the Mood For Love. MADSAKI, like Warhol before him, is skilled in the art of the hustle, and knows a fellow hustler when he sees one. Thus, where his previous copies of art historical 'masterpieces' served to shore up the elitism of the western canon, MADSAKI's reproductions of Warhol's Flowers, Skulls, Guns, Dollar Signs, and Brillo Boxes stay much closer to the spirit of their sources, which were themselves often copies of some far distant original. To Warhol, images were not sacred and implacable but something to be passed around like common coin. He believed meaning to always be in the particulars: in the vagaries of execution and amongst variations on a basic theme. This is one of the great lessons of his thirty-two paintings of cans of Campbell's soup: things can look the same on the surface and still be very different underneath.

Though MADSAKI's reproductions share the basic composition, coloration, and size of Warhol's paintings, it is the differences—in execution, tone, and feeling—that make them his own. The primary distinction comes from the variation between artists' two signature mediums: silkscreen for Warhol and spray paint for MADSAKI. 'It's really hard to express what could be expressed through silkscreen with a spray can,' MADSAKI explains, 'so I've got to add my own flavor.' Though he's a wizard with the spray nozzle, MADSAKI admits that his current approach to the medium is 'totally wrong' in the sense that he employs it more as a 'brush' than it would be in graffiti or street art. His spray techniques leave much more room for contingency and happy accidents, resulting in splatters and drips that add texture, atmosphere, and sometimes even emotional heft to his paintings.

This is particularly evident in MADSAKI's versions of Warhol's Double Elvis, 1963, and The Last Supper (The Big C), 1986. Though Warhol also used spray paint to create the silver background of his Double Elvis, MADSAKI's use of the medium creates a much more painterly and impressionistic appearance, thereby absorbing the doubled figure into the overall composition and pushing the painting closer to the realm of moody abstraction. Created in the final year of Warhol's life, The Last Supper (The Big C) was painted entirely by hand, a return to an earlier mode of production inspired by Warhol's recent collaborations with Jean-Michel Basquiat. It has also recently been revealed to be one of Warhol's most introspective and mournful works, layered with coded references to the artist's ambivalent feelings about his Catholic faith as well as to the escalating AIDS crisis. (In 1986, HIV/AIDS was still disastrously mislabeled as 'the gay cancer,' and cancer was colloquially referred to as 'The Big C.') Though painted over thirty years later and in response to an entirely different set of personal and cultural prompts, MADSAKI's interpretation of the painting manages to sustain, and in some ways underscore, its twin themes of suffering and salvation. By replacing Christ's downcast gaze with his signature 'drippy smiley eyes,' MADSAKI makes the painting at once more irreverent and more sorrowful than the original. Astonishingly, MADSAKI's small modification manages to push Warhol's composition closer to the tone and tenor of Chow's Kung Fu Hustle, proving the notion that, in the right hands, the art of the hustle can pave the way to enlightenment.

Perrotin is pleased to present Japanese artist MADSAKI's first solo exhibition in Hong Kong, his third with the gallery following previous shows in Paris and Seoul. Featuring new paintings and an installation, the exhibition will showcase three of MADSAKI's iconic series: his 'Warhol' series, 'Movie' series, and 'Character' series depicting popular cartoons. As a special homage to the city, MADSAKI is exhibiting a series of paintings referencing celebrated scenes from Hong Kong cinema, including Wong Kar-wai classics such as In the Mood for Love and Chungking Express, comedy star Stephen Chow's Kung Fu Hustle, and more.

A graduate of New York City's Parsons School of Design (BFA, 1996), MADSAKI was born in 1974 in Osaka, Japan and raised in New Jersey, USA, an experience between two cultures that formed his aesthetics and personality. While much of MADSAKI's work centers on his interest in art history and critiquing mass culture with references to slang, movies, and manga characters, the artist has recently been exploring more personal and intimate topics. To express this visually, MADSAKI developed a signature style using spray paint as a fine art medium, stemming from the fact that he has never participated in illegal graffiti on the streets. The artist is particularly known for his 'Wannabe' series, which at first glance humorously targets old masters, yet its deeper meaning is a recurring theme that can be found throughout MADSAKI's artistic practice, an attempt to use laughter and humor as both distraction and therapy for his internal turmoil.

If I Had a Dream 假如我有一個夢

Sign up to be among the first to know when new exhibitions by MADSAKI or at Perrotin open.