The artist and writer Harland Miller is known for his large-scale, playful reworkings of Penguin book covers.

Miller takes much-loved book jackets of classic works by Hemmingway, Fitzgerald, Edgar Allen Poe and others as his starting point. By rendering them in oils at poster size with quirky new titles, he transforms them into contemporary, often satirical commentaries on life and literature. Whether ironic, nostalgic, or downright cheeky–Dirty Northern Bastard, by DH Lawrence, or I'm so Fucking Hard, by Hemmingway–the titles demythologise and amuse in equal measure.

Harland Miller is attracted to books as objects–the more battered, stained and lived in the better. 'I remember my parents' Penguin books. For me, they are about nostalgia for a by-gone era–that musty smell, those coffee-mug rings, the often heart-breaking inscriptions on the inside cover.' Miller has lived and worked in New York, Berlin and Paris. Born in the North of England in 1964, Miller's fondness for the drizzle and grimness of those northern towns remains a strong theme in his work. 'I suppose mine is a very English sense of humour,' he says.

Related Video & Audio The Making of Harland Miller's print The Me I Never Knew 24 July 2015, Other Criteria

Harland Miller's works switch between being sardonic, hilarious and nostalgic as his own phrases replace the original titles of Penguin books. 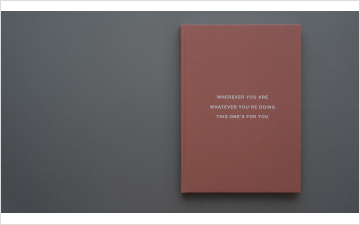 Harland Miller: Wherever You Are Whatever You're Doing This One's For You 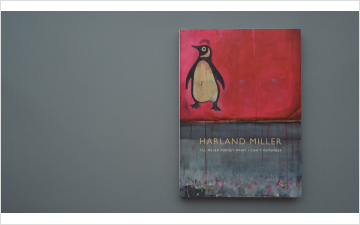