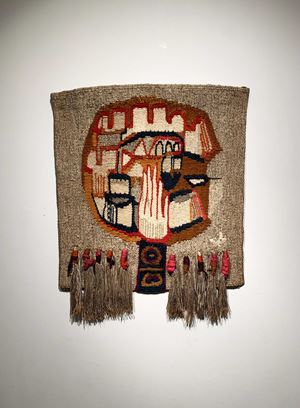 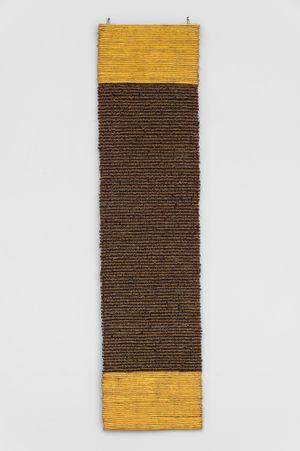 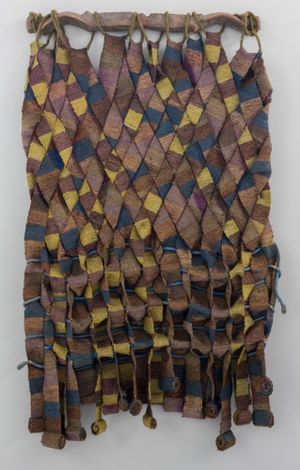 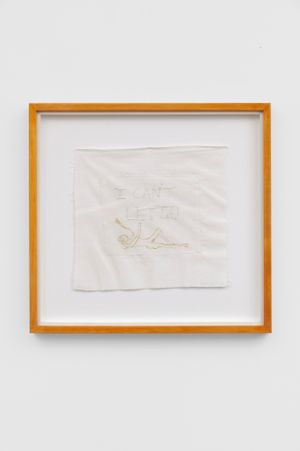 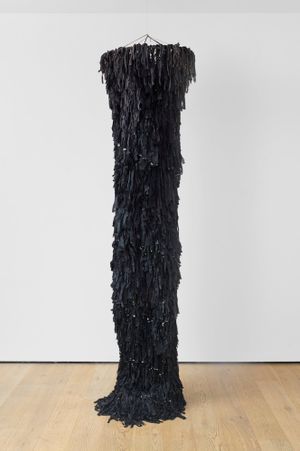 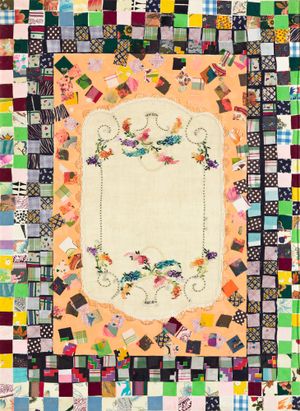 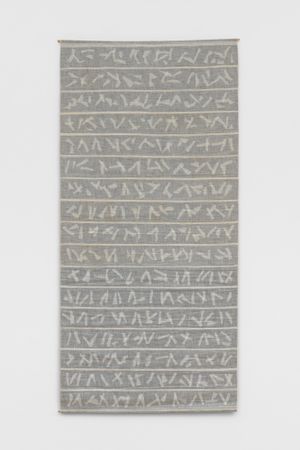 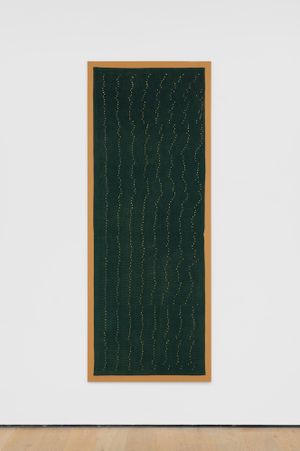 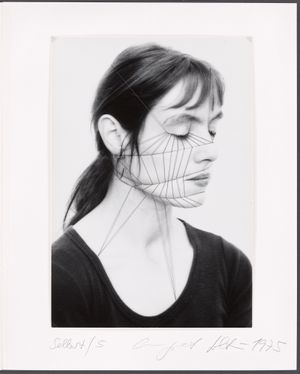 Canadian-American artist Miriam Schapiro (1923–2015), who first came to attention in the late 1950s for hard- edge abstract geometric paintings, was a pioneering force in the Pattern and Decoration movement that emerged in the late '70s. Tidy Art (1976), from Schapiro's series of painted fabric collages collectively known by the artist as Femmages, takes centre stage at Masterpiece Online. Her Femmages paved the way for the critical reception of craft as a respectable medium in feminist art circles of the time, as set out in Schapiro's manifesto on the subject, Waste Not, Want Not: An Inquiry into What Women Saved and Assembled — Femmage, written in collaboration with Melissa Meyer. The antithesis of male-dominated Abstract and Minimal art movements, these works are colourful, hyper-feminine, kitschy and, above all, decorative.

British artist Su Richardson's Goodbye Rug (1980), a crocheted wall-mounted rug, with stitched gloves and mementos from the First World War, similarly illustrate the possibilities of collage and textile. The work was inspired by Richardson's uncle, who returned from the war while many of his friends didn't, and incorporates handkerchiefs sent from the frontline back home to sweethearts. The gloved hands wave men off, like many wives, fiancées and mothers did at the time.

Italian nonagenarian Greta Schödl (b.1929) and the Franco-Cuban artist Carmen Lydia Đurić (known by her artist name Hessie, 1936–2017) took textile a step further, using it as the basis for 'mark-making.' Hessie, a self- taught Cuban immigrant who lived in France until her recent passing, combined embroidery and collage to create a new language that incorporated domestic materials found in the home, such as paper, clothing, hair, dust, fabric, buttons and toys. Schödl, on the other hand, used text to cover her supports, layering fabric, canvas and handmade paper to create abstracted concrete poems on textile surfaces.

Similar to the work of British artist Tracey Emin (b.1963), whose cotton-embroidered canvas I Can't Let Go (2007) is featured as part of the presentation, German artist Annegret Soltau (b.1946) embraces thread as her primary medium, embroidered on or through supports–whether a piece of fabric as with Emin or on photographs, often of her own body. Both artists use their own personal histories as inspiration, literally stitching their life stories into visible forms.

Colombian Olga de Amaral (b.1932), whose major touring exhibition To Weave a Rock opens at MFA Houston in July, and the late Polish fibre sculptor Barbara Levittoux-Swiderska (1933–2019) are linked together through their monumental ambitions, each making works measuring up to three-metres-wide. Working independently, both incorporated materials such as horsehair, sisal and cut fabric, constructing free-standing sculptural forms that extended the capabilities of fabric and the loom. Informed by the weaving traditions of their individual homelands, de Amaral and Levittoux-Swiderska equally embraced space, extending their textile-based architectural installations beyond both home and wall. The Croatian artist Jagoda Buic (b.193o), a contemporary of de Amaral and Levittoux-Swiderska, worked on a similar scale but with a more cross-disciplinary focus drawing on her wider creative practice that encompasses scenography, set and costume design.