Former monk, theologian, historian and artist Dom Sylvester Houédard emerged as a cult figure of London's 1960s counter-culture. Born in Gernsey but educated in Rome and Oxford, Houédard worked as a military intelligence officer before becoming a practicing Benedictine priest at the Prinknash Abbey in Gloucestershire. He wrote extensively on new approaches to spirituality, philosophy and art, becoming a leading authority on the Beat movement. Often referred to simply by his initials dsh, Houedard. has become widely recognised as a leading figure and practitioner of concrete poetry, exploring its links to cybernetics and linguistics. His abstract visual poems were created through the use of an Olivetti Lettera 22 typewriter, hence their classification as Typestracts - a combination of the words 'typewriter' and 'abstract.'

As well as publishing and lecturing at various institutions, Houedard exhibited throughout his lifetime at venues including the Arnolfini, Bristol (1966); Lisson Gallery, London (1967 and 1968); Stedelijk Museum, Amsterdam (1972); and the Victoria & Albert Museum, London (1971). Exhibitions featuring dsh's work have been organised posthumously at the Print Center, Philadelphia (2019); South London Gallery (2012); Institute of Contemporary Arts, London (2009); and Whitechapel Galler and Hayward Gallery, London (2000).

In the 1960s, Dom Sylvester Houédard, a Benedictine monk who lived most of his adult life at Prinknash Abbey in Gloucestershire, England, would sneak off on weekends to London, where he participated i

The concrete poetry piece was written by an author who was new to Typographica, Dom Sylvester Houédard, known as 'dsh' or 'the Dom' to his fellow artists and activists in 1960s London. His avant-garde 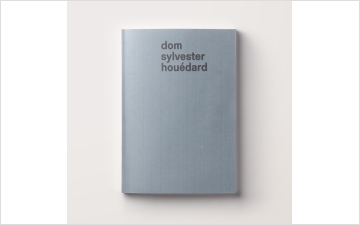