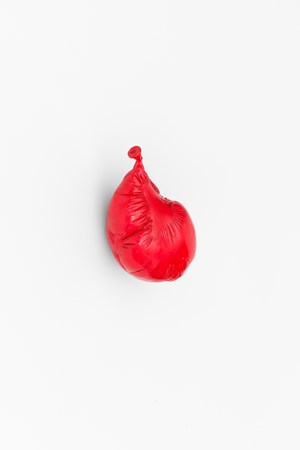 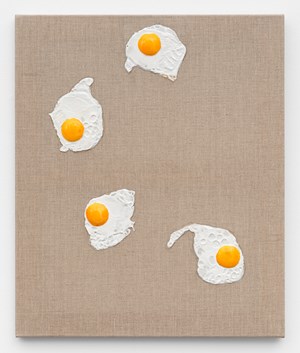 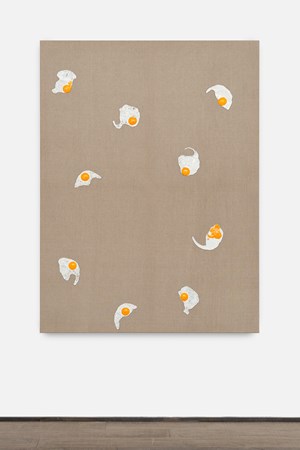 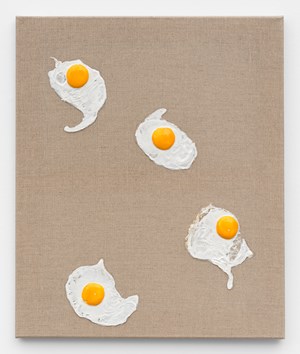 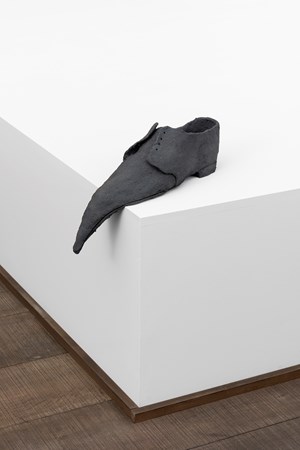 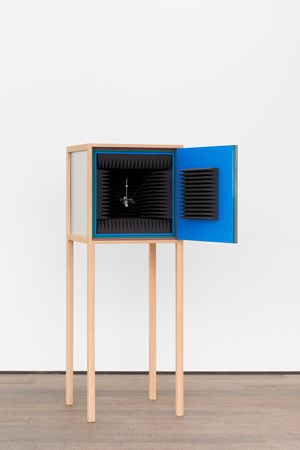 Fried eggs are comfort food. They resist interpretation. Sometimes things really are as simple as they seem to be. And then sometimes things—fried eggs, flippers, orange peels—perform their simplicity.

Central to David Adamo's second solo exhibition at rodolphe janssen is a series of works on raw canvas depicting swirling compositions of trompe l'oeil fried eggs. It's the multi-faceted coagulation of fried eggs that we are asked to focus in on here; Adamo worked layer by layer to build up their milky translucency. Each egg is a unique being, collectively forming a rhythm by which to see them—and ultimately the entire exhibition—as a whole.

This silent rhythm is in turn punctuated by another in absentia: the inner workings of a metronome housed in a soundproof box ticks away, barely audible. In past works, Adamo removed the device's inner mechanism, leaving only its casing—an homage to György Ligeti's 1962 Poéme Symphonique. The metronome's role reversal hints at a central element in Adamo's work, in which the beat of everyday life is found through the removal of elements.

In the centre of the space, a stage is set incongruously with remnants of an absurdist performance: a single flipper; an orange peel; a comically large and cumbersome shoe, dripping over the edge of the platform. Like Adamo's eggs and metronome, the jettisoned objects of a apparent past performance gesture to the tick-tock of daily life. Their materials betray a cartoon-like absurdity: a hyper-real flipper and clown shoe are sculpted in ceramic, underlying the impossibility of their prescribed use even when they appear to have just been worn.

Even so, these objects also gesture back toward movement and liquidity. Moving through water as moving through egg whites. As liquid coagulates, after all, it densifies. But what does it obscure in doing so?

Sign up to be among the first to know when new exhibitions by David Adamo or at rodolphe janssen open.