Gordín emerged in the Argentina of the late 1980s and was part of a group of artists who were criticised for their apparently apolitical art. In fact the artist talks of the sense of the 'joy of creation' which suffuses his work as a necessary reaction to the extreme darkness of the terrifying period in the 1970s which Argentina went through. Gordín's fascination with the world of books led to his iconic series of faux magazine covers which drew from the ancient marquetry techniques found in Renaissance palaces and churches. Magazine covers mark a continuum through the artist's production. Gordín's work connects two worlds not often seen together: the exquisitely crafted object and the 5 cent magazine meant to be read and discarded. This ability to embrace culture from a 360 degree standpoint is crucial in understanding both the artist and his practice. His early works contain an ability to look at the world with the wonder of a child. His constructions transmit pure visual pleasure through their endless playfulness and originality. An admirer of the great comic French film-maker Jacques Tati, Gordín engages with the concept that comedy can take shape from any kind of observation. Inevitably, as both his artistic vision and his technique have developed, the wonder has remained as has his lightness of touch, yet it has progressively outgrown that of the child.

Sebastián Gordín creates grand installations as if they were little museums to mankind. He combines marquetry with abstract objects and magnificently worked figurative elements like complex wooden floors, books and tables. Although everything is rigorously made in miniature, he manages to reveal to us a new worldview, an unsuspected universe, which is parallel to ours but yet with its own logic and vocabulary.

Sebastián Gordín, (1969, Buenos Aires, Argentina) lives and works in Buenos Aires, Argentina. He studied drawing at the School of Fine Arts Manuel Belgrano from where he graduated in 1989 as a teacher of drawing. His works have been extensively shown across Europe, America and Africa in such prominent institutions as: in the Instituto de cooperación Iberoamericana (ICI), Buenos Aires, Argentina (1993), First Biennial of Art in Johannesburg, South Africa (1995), ICI (2001). In 2009 he received the International Artists in Residence Argentina (RIAA), Ostende, Argentina. Throughout his career, Gordin has been presented in several international galleries and art fair including Miami Basel, Basel, Arco Madrid, Art Rio and Zona Maco. In 2014 he had a major retrospective at Buenos Aires Museum of Modern Art. His works are part of several public and private institutions, such as: Musac, Museo Nacional Centro de Arte Reina Sofïa, Museo de Arte Moderno de Buenos Aires, MAR Museo de Arte de Rio de Janeiro, Blanton Museum of Art, Houston Museum of Fine Arts, Museo Nacional de Bellas Artes de Argentina, Museo de Arte Contemporaneo de Bahia Blanca, Argentina and in many private collection such as the Coleccion Cisneros, New York City and Caracas. 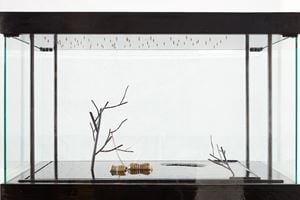 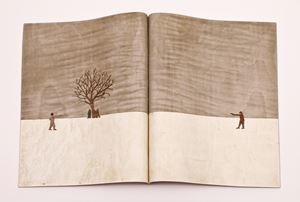