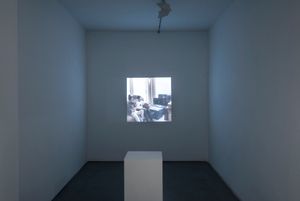 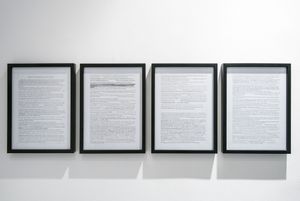 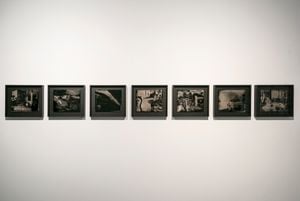 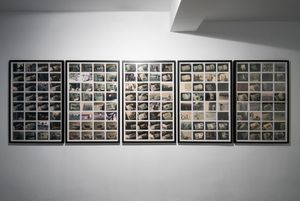 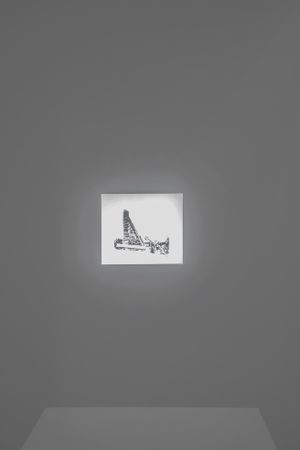 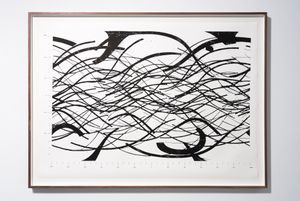 Reality and fiction become analogous spheres whenever one casts a critical eye over history or even science. They operate as parallel dimensions of a symbolic constellation that affects the production of knowledge on the grounds of specific sociopolitical contexts. Thoroughly invested in an endeavour of both speculation and historic rigueur, the present exhibition is the result of an unequal accumulation of time (Milton Santos): overlapping layers of history and nature, scientific matter and symbolic culture — various data sedimented on glass, photography, paper and celluloid that contest and critically inquire into the all-so-many worlds that separate humankind from nature; nature from culture; reality from fiction; thus setting aside diverse cultures and their respective cosmologies.

In the wake of Paloma Polo's ever-expanding investigations towards an ecology of knowledge (Boaventura de Sousa Santos) — one that recognises difference and constantly overflows the abyssal borders of Western's totalising discourses —, two different projects have emerged and crossed each other's paths in a history of mutual concerns. The Path of Totality (2011) and Apparent Position (2012) look through the solar eclipse as a phenomena that may shatter horizons of stability and visibility in both political and epistemological fields. While the former was driven by a broad interest in the history of imperial expeditions devised to observe such events — and by the opportunity to delve into unobserved scientific & colonial realms —, the latter focuses on a particular expedition aimed at exploring the Theory of Relativity as the ace in the hole in the premises of 20th century's metaphysical queries. All the while, the artist constantly cross-references those expeditions, opening up a portal between the past and the present, among other fictitious temporalities.

By reassessing this twofold project, and the myriad of information gathered amidst astronomical archives dispersed around the globe, a new multi-fold space-time dimension acquires shape. The ensemble of artworks in this show could well be seen as both a mirage of past events and as a mise en abîme immersion into a series of expeditions encapsulating the highly charged ideological atmosphere of modernity, one invested in scientific dogmatism and pervaded by the momentum of all-encompassing historical accounts. Throughout the 19th century and beyond, the various ventures to observe solar eclipses were at once forging totality —insofar as they consolidated 'universal' knowledge— and also formulating an epistemological a priori destined to shape a single-minded reality in spite of any other existing cosmologies. As anthropologist Marisol de la Cadena postulates, the history of modernity and colonialism is the reduction of many worlds to only one world.

What follows is an attempt to excavate certain layers of history parallel to the artist's quest within a field of study that remains as dim as the twilight of the eclipse, that is, the nature of such expeditions in the throes of colonial expansionism, and their impact on the communities where those ventures took place.

In relativity we may rest, never looking sideways though

As far and accurately as human gaze could reach the skies via a telescope, the British expedition of 1919 to Principe Island, lead by astronomer Sir Arthur Eddington, was crucial for the settlement of Einstein's theories on the bending of space as a reaction to gravitational forces. The year that had begun under the sign of geopolitical unease in the wake of World War I, ended with an unprecedented ontological turn for the sciences and the modern world at large: the observation of a solar eclipse was to set on stone (on photographic plates, in fact) the Laws of Relativity as a body of elegant mathematical equations destined to shaping space-time relations thereafter; and in doing so, dismantling previous representations of the universe.

At that time, a field expedition to observe such natural phenomena was an enduring adventure, a tour de force in terms of scientific paraphernalia and human contingent, both essential elements to delve into remote lands and unsubstantiated knowledge; that is to say, into theories remaining to be grasped under visible evidence, despite its ethereal matter: when day shifted into night on 29 May, light around the eclipse was supposed to be deflected due to the bending of space between the 'black sun' and its neighbouring stars.

History is usually told under the abrasive light of day, while the night remains an ever-mysterious realm for speculation and dream. However, in that given date, at 2:15 pm, when the eclipse reached its totality (path of totality is the scientific name for the areas of total darkness over the planet caused by the solar eclipse when at its peak), this equation was to be subverted in Principe Island, a remote Portuguese colony off the Western Coast of Central Africa, never previously inhabited before the arrival of Europeans in the 15th century — by the year 1919 though, it was a land of cocoa and sugar cane plantations, still employing semi-slavery labour; the forceful site of a imperialistic enterprise which in that very moment in history became a site-specific laboratory for the observation of a paradigmatic metaphysical event.

When looking sideways at the realm of science though, there is a matter of invisibility that becomes apparent under the dark patch of the eclipse, paradoxically unveiling unacknowledged worlds and belief systems —the local versus the universal or, alternatively put, versus the West, also 'universal' where it pertains the terrestrial globe from a colonial perspective. The notion of annihilating distance (Soojung-Kim Pang), between humanity and the universe —and on a rather pragmatic sense, between the European empires and the world to be conquered— is a key element for the unravelling of such scientific endeavours from a critical overview. If on the one hand reaching universal laws magnifies political control over knowledge, technology and historical accounts, on the other, it overshadows the cultural, social and economic phenomena taking place on the ground in the very lands where telescopes would sit amidst an entourage of European plutocrats and the ever-invisible native labour force demanded, and often exploited, for such scientific enterprises.

Path of Totality – notes on visible and invisible matter

When the Moon lines up directly between the Earth and the Sun, the Moon's dark inner shadow, the umbra, sweeps across Earth's surface creating a total eclipse of the Sun. The track of the Moon's shadow across Earth's surface is called the Path of Totality (....) In order to see the Sun Totally eclipsed by the Moon you must be in the path of totality

The works of Paloma Polo in this exhibition are extracts, exhibits and re-enactments of a faulty or impaired vision of the world — a secluded one, remote from the perspective of the local population in the non-Western sites where most eclipses have been observed since the 19_th_ century, or even from the vantage point of ordinary man and woman in the very heart of the mistakenly called Old World. Those pieces refer to the apparatus of knowledge developed afar from the diversity of co-existing cosmologies, insofar as it seizes nature under the dome of convention and rule, subordinated to axiomatic notions of economic progress and technological advancement. On a different note, the telescopes and other instruments for enhanced vision and measurement of the natural world operate as prosthetic extensions of the human body, mechanisms whose sheltering architecture have been devised for the building of scientific knowledge — quite precise when in the comfort of laboratories, uncertain whenever out there in the field, exposed to an ever-shifting dynamic reality.

As The Path of Totality depicts the very constructs of human ingenuity — telescopes in their temporary sites for the observation of the eclipse —, it exposes the precariousness of scientific endeavours vis-à-vis its all-encompassing theories. Anti-monuments, these architectures stand for a never-to-be-achieved totalising impetus towards epistemological unification, hence their very eclectic edifice is the result of a rather violent, adversely syncretic manoeuvre; one that derives as much from the supposed abstraction of scientific pursue as from the heterogeneous reality surrounding their own construction — invariably dependant on local labour, technology and source of materials.

In a similar fashion, the same could be said of the 'sculptural' work on the difficulties of picturing the event, a collage of words and sentences extracted from astronomic field reports that recreate time/space realities through semantic exercises based on the playful use of scientific lexicon. As Polo reformulates threads of supposedly objective information, disparate inner images appear in lieu of actual complete lines of cemented thought; and therefore the world acquires the shape of imagined spaces and narratives, thus engendering a reality only existing in abstract and speculative thinking processes —just as science itself in fact: albeit objective in theory, ever an speculative field.

If Polo's drawing of different paths of totality could stand for a yarn or a nest (Thrown Shadow), this is only to the extent that the drawing is the representation of something else, a model for nature, decoded as readable data. Since neither in nature nor in science nothing really stands for what it appears to the senses, here we are faced with the very constructs of culture. This endlessly folded ribbon merges in one sole image all the Paths of Totality of total solar eclipses projected on earth since the first astronomical expedition took place, in 1851, until 2011; conversely, it also alludes to the flow of journeys, mercantile and political displacements and expansions over the globe.

By the same token, the series Simultaneity is not an invariable concept represents the unachievable site for a total enlightenment of the eclipse: paradoxically, a dead zone of obscurity, a standstill for all ontological and anthropological queries remaining to be grasped in the wake of the 1919 expedition. This series of 14 photographs, produced by the same vintage technology, are rigorous virtual re-enactments of a hidden dimension in time, as if the images had been taken from a diversity of vantage points during the very moment when the total eclipse was being observed by Eddington in the remote colonial villa in the plantations of roca Sundy — an unfeasible task back then, given the size and weight of cameras, and their poor accuracy at dark. Notwithstanding, the absence of human presence in those desolate photographs is as revealing of the lack of data about the expedition in anthropological regards as it is suggestive of a muted sense of obliviousness towards the immediate surroundings that ultimately enabled such observation on material grounds. As phantasmagorias of an unattainable past, these images conjure simultaneous perspectives over the stillness of an impenetrable moment in history: the time-lapse of a life-changing eclipse —if not for the inhabitants of Principe Island, for the purposes of a modern world; of science and scientists alike.

None of the works presented in this exhibition are unified in their respective immanence; quite the opposite, in fact, as they appear in a veiled state of frailty, demanding from the public an inquisitive attitude towards their very existence in the world. In their incompleteness, they prompt repositioning and reframing as a political act for rethinking modes of totality.

Sign up to be among the first to know when new exhibitions by Paloma Polo or at Sabrina Amrani open.