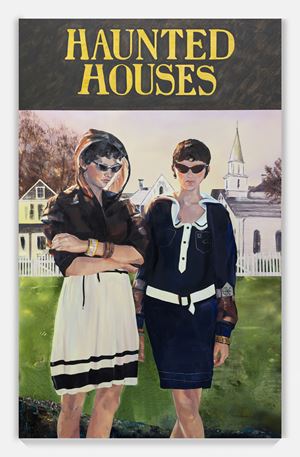 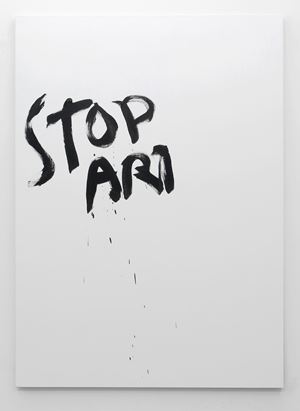 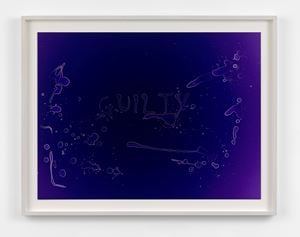 Simon Lee Gallery is pleased to present WORDS, a group exhibition that explores the function of language and the role of text in art making. Whether dealing in political statements, ribald asides, poetry and literature or illegible scrawls and scribbles, the works in this exhibition comment on the ways in which ideas are exchanged and communication effected. While the visual language of an artist’s vernacular is well trodden ground, WORDS highlights the way in which—from the late 1960s onwards—conceptual art practice delved into notions of authorship, aesthetics and the dematerialisation of the traditional art object, in the pursuit of complicating the relationship between the verbal and the visual. Taking words and language as both subject and medium, the works presented explore the interrelation of form and meaning, and the distinction between looking at and reading a painting.

The role of language in conceptual art aids in the emphasis of ideas over visual forms, challenging the traditional art object. Central to many artists’ practices in the 1960s and beyond was this intersection of linguistic and visual representation. Mel Bochner’s early practice probes the ways in which we receive and interpret information. In Forgetting Is The Only Continuum, first conceived of in 1970, Bochner questions the essential relationship between an idea and the means of its communication; this body of work marked a critical moment in the history of early conceptual art. By contrast, in Word Chain: Faucet (Ilene's story) (1975), John Baldessari builds a narrative from a fragmentary database of words and images, obfuscating the way in which the viewer receives information. Challenging the traditional relationship between an idea and its visual explanation, Marcel Broodthaers’ Roule Moule (1967) sets out the title of the work beneath a panel of varnished mussels, leading the viewer to consider the structural connection between language and image.

The power and influence of text-based art as a vehicle for provocation against social and political injustice is prevalent in the work of Jenny Holzer, whose forceful ‘Truisms’ have become part of the public domain. Her ‘Survival’ series, written for display both as electronic signs and aluminium plaques, instruct, inform and interrogate with cautionary phrases, such as the ambiguous, ‘Turn soft and lovely anytime you have a chance’. Gary Simmons’ practice uses the act of erasure to reflect on African American social and cultural narratives. In Moreland Midnight he smudges the name of Mantan Moreland, a now forgotten black actor of the 1930s and 40s, across the paper leaving a spectral residue that evokes a sense of loss while simultaneously conveying the power of memory. Similarly, Bethany Collins uses techniques of erasure in her approach to varying translations of Homer’s Odyssey in her exploration of the politics of language. In Wall (2017) and Haunted Houses (2019) Dexter Dalwood and Paulina Olowska respectively take a different approach, stamping out the letters of representative words that deal with, in Dalwood’s painting, the racial and political rhetoric surrounding the Mexico-United States border wall and, in Olowska’s, feminist discourse, inspired by the writings of Simone de Beauvoir and readings on witchcraft, the occult and symbolic burial.

Poised on the precipice between the verbal and visual, Cy Twombly’s Seguso (1976) synthesises image and language. Confronted with calligraphic scrawls, the viewer strives to find legibility in a composition that defies any coherent reading. With his poetic output, Twombly complicated the notion of text in art, at once profoundly communicating with his audience and at the same time, mystifying meaning.

14 new artworks have recently been added by Simon Lee Gallery.
Sign up now to be among the first to know when new artworks are added.