The artist Yoon Kalim says that the work evokes the emotion of "Nostelgia" from the beginning to the end of her work. It is also an emotion about a particular space, time, etc., or the source or nature of existence. Her works are a medium of contact or experience to the audience. The artist has provided a place and experience for the audience to enjoy things that have passed through various performance practices, such as learning or transferring specific skills. During the years of learning from craftsmen, such as carpentry, baking, and Korean traditional desserts, she learned the most essencial parts of technology and used them in her projects. When reproducing the technology with her own work, she showed the reconstructed results by freely using the changes and applications as an art form. And this result mediates the audience and causes certain behaviors.

In May 2021, the solo exhibition "Tactile Hours" will showcase works made through traditional embroidery techniques that have been mastered for several years from an 'intangible cultural asset'. Embroidery was placed on the illustration of an old book that was no longer in circulation, and an embroidered image was created, citing a passage from the poem. This is a method that has been carried out since 2008, and is reconstructed into a new image by selecting illustrations drawn in books found in second-hand bookstores and adding the Yoon's embroidery format to it. In the previous method of limiting materials to gold and silver yarn and focusing on the historical reproduction of images, we have recently used more imaginatively to replace sur-real colors which would not be able to exist as the animal's fur. This can be interpreted as a kind of collaborative attitude beyond the artist's time and space, which was added to the imagination of the original producer who heard and recorded the description of a particular animal in the days when there were no cameras. 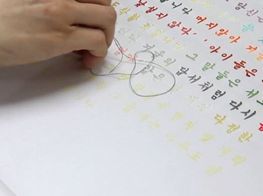 Sign up to be among the first to know when new exhibitions by Kalim Yoon or at Space Willing N Dealing open.
Sign UpLogin