We do not look at the world from a distance; we are in it, and that’s how we feel.— David Hockney

A rebel among his contemporaries, Hockney (b.1937)—largely known for his portraits and vast landscapes—is also recognized for his refusal to be pigeonholed in a particular medium or artistic style. Over the span of six decades, he constantly experimented with numerous materials and methods available, embracing an open-minded approach to art and technology (including sketching with iPads) that led to his acclaim and relevance today.

The works presented here look into the technical challenges within the process of depiction to address two fundamental questions: 'How do we see? How do we depict?' They go against the popular vanishing point perspective, which, to Hockney, limits the audience by keeping them outside of the painting. The artist believes that the human eye is more fluid and dynamic than a single point of view. Through employing multiple perspectives, which reflect the moving focus of the human eye, Hockney masterfully absorbs the viewer into the work, making them a part of the world instead of a mere onlooker.

This is shown in his innovative still-life lithographs such as Walking Past Two Chairs (1986), where he lends from Cubism to capture time and space, as well as the more recent photographic drawing 4 Blue Stools (2014), a digital collage of photographs that breaks away from photography’s single point perspective.

The Annual Special Exhibitions at STPI Gallery give audiences in South-East Asia and Singapore the rare opportunity to encounter a remarkable scope of works on paper created by the most significant artists of modern and contemporary art history. Talks and programmes are designed to provide insight into the various themes and practices of the artists represented.

Past exhibitions include 200 Artworks 25 Years: Editions for Parkett (Parkett Publishers), Henri Matisse: Works from 1917–1952 (Estate of Jean Matisse), The Mystery of Picasso’s Creative Process: The Art of Printmaking (The Archives of Claude Picasso), Edo Pop: The Graphic Impact of Japanese Prints’(The Collection of Minneapolis Institute of Arts), and Zao Wou-Ki: No Boundaries (The Estate of Zao Wo-Ki).

A Matter of Perspective 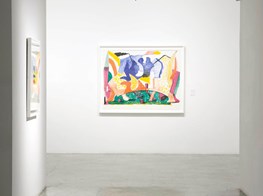 Part of Singapore’s national Visual Arts Cluster of regional leading institutions alongside National Gallery Singapore and Singapore Art Museum, STPI – Creative Workshop & Gallery was founded in 2002 and is celebrating 15 years in 2017. STPI is a dynamic creative workshop and contemporary art gallery, committed to the promotion of artistic... 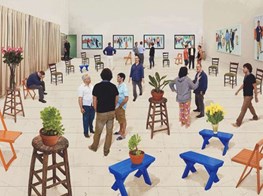 A solo show of works by celebrated British artist David Hockney will open on July 1 at STPI Gallery. Titled David Hockney: A Matter Of Perspective, the exhibition will feature 36 prints, drawn mostly from the Singapore Art Museum's collection. It runs until Sept 9 and admission is free. Turning 80 next month, Hockney is often credited as being...

Sign up to be among the first to know when new exhibitions by David Hockney or at STPI - Creative Workshop & Gallery open.