Melanie Siegel's pictures show the domesticating interventions of people in the landscape and the re-forming of urban structures by nature. The works are permeated by the interplay of two pictorial worlds: on the one hand, the order of architectural and geometric pictorial structures, and on the other hand, the rampant vegetation and original world of plants. They are concerned with the threshold areas of the landscape space with their in-, out- and demarcations and thus with the cultural and social inscriptions that make the natural space a designed environment. Detached from their usual context, places and things that are supposedly unimportant, even perceived by many as ugly, are declared worthy of being depicted and are restaged with an extraordinary sense of beauty.

The works can be seen as a grand narrative that spans several creative years and in whose motif cosmos cross-references always appear. What is seen forms the starting point of the painting and the subjects are often found in the immediate vicinity. In addition, with the help of Google Maps, familiar areas are re-explored in the reverse perspective. In the painting process, the discovered is expanded, alienated and recomposed through associations, in the spirit of romanticism. The aim of this dialogue is not to imitate the actual situation, but rather to work out the essence of things by oscillating between image and personal imagination, thus getting closer to the actual pictorial moment.

'[...] In Melanie Siegel's works we again get a feeling for the mysterious and a hint of how the mysteriousness feels. For she succeeds in creating an atmospheric presentation of a nature that is simultaneously designed and mysterious. In doing so, she lays the foundations for an understanding of landscape painting that is adapted to current conditions and at the same time shows that this genre is still far from being exhausted today'. (Extract from the catalogue text by Anne Simone Krüger, art historian M.A.)

Melanie Siegel's pictures show the domesticated interventions of man in the landscape, which turn the natural space into a designed and conquered place. 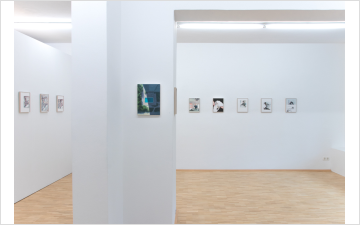