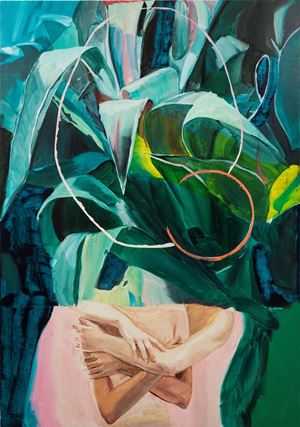 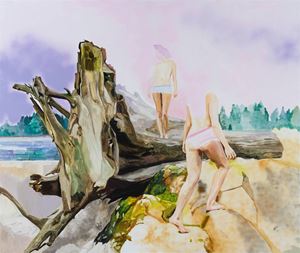 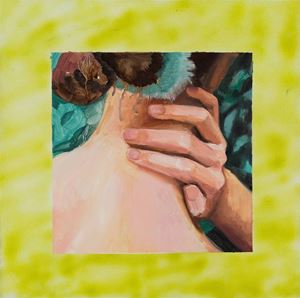 Tabula Rasa Gallery is pleased to present Yuan Yuan's solo exhibition Glasswort, on view from 23 November 2019 to 10 January 2020. Included in the exhibition will be more than 30 oil paintings and works on paper series No Worry Garden that Yuan executed from 2016 to 2019. This will be her first exhibition in Beijing since 2016.

Glasswort is a halophyte plant thriving in saline environments. With the prevalence of consumerism, it now serves as an ingredient for skincare products for women, and ultimately a part of the manufacture chain. Taking Glasswort as its title, the exhibition brings together plants and women in an unexpected way. As in her first solo exhibition Halfway into the Garden at Tabula Rasa, she contemplates the issues of female identity and their spiritual world, creating a space with female body parts as its subject. Most of the female's faces are absent, only their body parts appear in ambivalent settings and lights. Yuan uses figurative style to emphasise the juxtaposition of body, plastic fruits, and environment, revealing the contemporary life in which multiple realities are in a state of superposition. As the artist noted, 'it seems we are here physically, yet mentally we are elsewhere.'

As one of the pivotal figures of figurative painting in China, Yuan Yuan focuses in particular on portraiture. Hanging on an individual wall covered with mirrors, the Portrait of a Girl Holding Chin series demonstrates her exploration in the production of women's image on the Internet. On the square panel, she focuses on the poses that women tend to do when they are taking selfies touching or holding their chins and makes modifications to them. While extracting and enlarging feminine characteristics, she removes their identities, turning them into homogenous images. She gives the subjects she depicts different psychological states with vigorous yet loose brushstrokes and bright colors. By creating these seemingly filtered paintings, the artist reflects on the realness in the virtual world and the alienation of women's image.

During Yuan Yuan's stay in an art residency program in Berlin, Germany, she visited Friedrich des Großen's summer palace Schloss Sanssouci. This Rococo-style place is made up of several bizarre gardens in which the order of reality and the order of nature co-exist. Inspired by the trip, she began working on a series of works on paper called No Worry Garden, creating a private and other-worldly world with watercolors that resemble frames in animation. Selected works will be featured in the exhibition.

The catalogue of the exhibition will be published at the same time, which contains essays by Yang Zi and Sammi Liu. 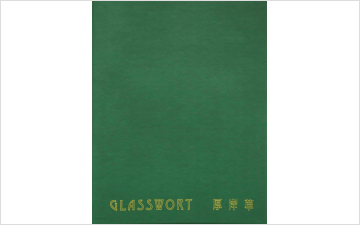 Sign up to be among the first to know when new exhibitions by Yuan Yuan or at Tabula Rasa Gallery open.
Sign UpLogin