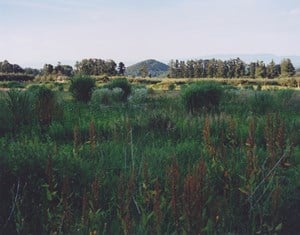 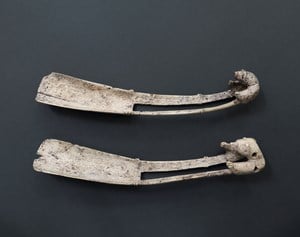 Nao Tsuda calls himself “a photographer who translates the world” and he uses his camera to capture and examine the relation between man and nature, which has unfolded continuously since ancient times. He began his current series, which finds, in Jomon culture, the origins of a society coexisting with nature, six years ago. In producing the series, Tsuda has conducted extensive fieldwork in the Jomon era throughout Japan.

Tsuda has identified a particular diptych work he photographed in the middle of winter in the northeastern region of Japan as catalysts for organizing the current exhibition.

March 9, 2011. Two days prior to the day when nature let out its scream, I was walking around the snowfields of the northeast. It was below freezing and snow had been falling non-stop for several days. In front of me was a small hill. Approximately 4,000 years ago, the forest on the hill had been used for religious rituals. Although I could see the trees of the forest, I was unable to approach it. I found that every time I took a step toward it, the lower half of my body was buried in snow. It seemed impossible to reach the ground under the snow with my feet. I decided to wait for spring.

Tsuda conducted his fieldwork in areas north of Tokyo, such as Hokkaido and the northeastern regions, with the intensity and rigour of an archaeologist. In addition to landscapes, which Tsuda has long made one of his subject matters, he has photographed and documented numerous relics, which also served as guides for his quest, in detail, recording what they are, where they were found, and their period of origin based on their archaeological evidences. Through his “Jomon walks”, Tsuda also physically experiences the traces of Jomon era life that remain in the local regions. Going beyond the researcher’s objectification of accumulated data, Tsuda has directed his attention to the spiritual culture of the Jomon period and its perspectives on nature, time, and life and death.

For Tsuda, these Jomon relics are not mere objects. They are instead “spirits with physical form” and “reincarnated life”. Regarding the images of these objects, which he has produced in negative to disclose their true meaning, he explains that in the world of the negative, i.e. the reversed world, there is light in darkness and darkness hidden within light.

All living things disclose their existence more fully in their disappearance from than their appearance in this world. When we turn the pages of a seemingly eternal, ten thousand years of geological layers, one by one, and light returns to the space of darkness and shadow, something is reflected and retained in our eyes.

This body of work, which focuses on the Jomon spirit and expressions found in the hitherto unseen original scenes and relics of Japan, reminds us that circulation and coexistence in nature are not narratives created in special parts of the world, but rather events cultivated inside each of us. It also simultaneously offers suggestions for how we might approach the future.

Nao Tsuda was born in Kobe in 1976. Through his viewfinder, he has continued to explore the relationship between human and nature, one of continued historical importance. He mainly photographs landscapes and has exhibited a large number of these works internationally since 2001. With a unique view toward nature and a sincere approach to the timeless theme, “the relationship between photography and time,” Tsuda is cultivating a new trend in landscape photography as one of its rising stars winning The Art Encouragement Prize for New Artists in 2010. In recent years, he has actively collaborated in areas beyond the field of contemporary art such as lectures, special classes and magazine writing, for which he regularly contributes. Since 2013, he has been a visiting associate professor at Osaka University of Arts. His publications include Kogi (2007), SMOKE LINE (2008), Coming Closer (augmented edition, 2009), Storm Last Night (2010), SAMELAND (2014), NAGA (2015) and TRIBUTE FROM GREEN FOREST (2015).

Sign up to be among the first to know when new exhibitions by Nao Tsuda or at Taka Ishii Gallery Photography / Film open.
Sign UpLogin