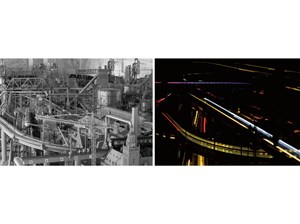 Taka Ishii Gallery Photography / Film is pleased to present UNMANNED, a solo exhibition of works by Yu OGATA & ICHIRO OGATA ONO from February 24 to March 31. The show, which will be their second with the gallery, will feature two different types of videos for which the artist shot, with a miniature camera, a nightscape of an imaginary city with a web of trains, that they meticulously crafted out of model trains, buildings, and factories from around the world, which they collected since childhood.

We began making the work 30 years ago when the world was divided between the two conflicting ideologies of capitalism and communism. We traveled to the communist bloc on our honeymoon and were moved by the existence of another world, based on completely different values, of the Berlin Wall, Stalin-era skyscrapers, and cities without retail stores. We recreated the shock of seeing this other world out of a 1/87 scale kit, called 'HO' scale in the model train world. After the first diorama was completed, we traveled in search of more cities and buildings that would upend our common sense. Based on our concurrent photographic practice and the architectural photographs we collected on our journeys, we had started building a new home in Tokyo. Yu proposed that we 'build another small city inside our home,' and we created an 8m long and 2m wide diorama. The new diorama was based on our foundational landscape—Tokyo and filled with light from neon signs, buildings, and factories, and an irrational web of trains. On top of that landscape, we overlaid the cities we had visited to shoot. The collapsing Communist world, giant factories, terminal stations, abandoned houses, tenement buildings, and red light districts spread under elevated train tracks... The train cars that run through this city are from all over the world; we collected them over many years since childhood.

UNMANNED comprises two different videos: a very representational one of the diorama city shot from the train that runs through it and an abstract one composed exclusively of shots of the trains' lights. As the title suggests, the work is made with little human intervention as possible, with automated trains, automated announcements, and automated cameras.

In the first video, the unique character of dioramas, arguably the ultimate medium for representational expression, is used to give meaning to every element including the train lineup, building details, positioning of people, and train announcements. As a result, form and sound are intertwined with complex cultural factors. For example, Portuguese and Dutch, languages of nations that once conquered the world, are symbolically used to create an accumulation of global cultures. In the latter video, which is silent, cultural factors are eliminated and everything is reduced and abstracted to the movement of light. The world depicted here feels weightless like outer space, and belongs to another dimension, like that of meditation and sleep, outside of realistic problems.

The two videos, which were made based on human brain circuitry that travels between figuration and abstraction, like the model train that runs between concrete and abstract space, leads the viewer's consciousness to the liminal space between reality and fiction.

Ichiro Ogata Ono was born in Kyoto and completed Master course at the Graduate school of Architecture, Waseda University. Yu Ogata was born in Tokyo and received her undergraduate degree from the Department of Architecture, Waseda University. They have alternately shot photographs and videos and constructed buildings and dioramas over the years to articulate a different spatial dimension and worldview through them. Their major publications include Okinawa Chokoku Toshi [Okinawan Sculpture City][0], Watashitachi no 'Tokyo no Ie' [Our Eclectic Tokyo Home][1], HOUSE (FOIL, 2009), and Ultra Baroque (Shinchosha, 1995). Their major architectural works include 'Tokyo Eclectic House' and 'Photo House.' Their recent exhibitions include Okinawan Modernism at Taka Ishii Gallery Photography / Film in 2015.

Sign up to be among the first to know when new exhibitions by Yu Ogata & Ichiro Ogata Ono or at Taka Ishii Gallery Photography / Film open.